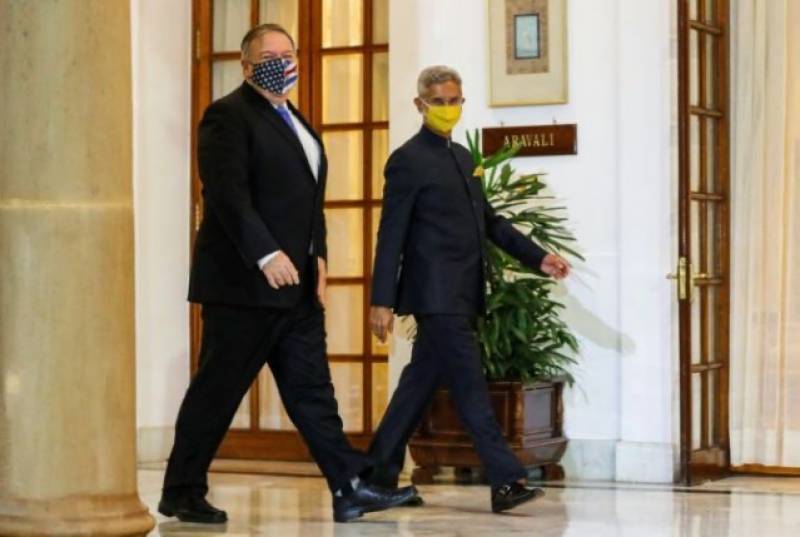 The United States and India are united against China's "aggression", the US defence secretary said Tuesday after top level talks between key ministers from the two countries.

US Defence Secretary Mark Esper and Secretary of State Mike Pompeo made China the focus of their meeting with India's foreign and defence ministers as the South Asian nation confronts China on their disputed Himalayan border.

"We stand shoulder to shoulder, in support of a free and open Indo-Pacific for all, particularly in light of increasing aggression and destabilising activities by China," said Esper after the meeting.

Pompeo said there were "robust discussions about the Chinese Communist Party", which he added was "no friend to democracy, the rule of law, transparency, nor to freedom of navigation".

India's External Affairs Minister Subrahmanyam Jaishankar and Defence Minister Rajnath Singh did not mention China by name during the meeting, but the foreign minister said peace was only possible when all countries respect "the territorial integrity and sovereignty of all states".

He also called for a "multi-polar Asia" albeit where China is the number one economic and military force.

The United States and India signed off on a series of accords including one which will allow the US military to share sensitive satellite and sensor data with its Indian counterparts.

This will help New Delhi to better use US technology in targeting missiles and placing its troops.

It will also allow the United States to provide the latest navigational technology on any fighter jets it supplies to India.

Esper has been pressing the case for India to buy US F-18 jets and move away from its reliance on Russian weaponry.

But India wants more of its military equipment made domestically and is demanding greater investment.

Pompeo and Esper had already called for a deeper relationship during one-on-one talks with their Indian counterparts on Monday.

Jaishankar tweeted after his meetings with Pompeo that relations between the emerging allies have "grown substantially".

Esper and Singh "welcomed the expansion of information-sharing", a US statement said, while the Indian Defence Ministry reported the two officials had discussed "potential new areas of cooperation", without giving details.

Relations with China have grown increasingly tense for both the United States and India in recent years.

Washington is in a tense trade battle with Beijing and President Donald Trump's administration has stepped up warnings about China's growing economic and military power.

India has sought greater international military support since a deadly border showdown with China in June. At least 20 Indian soldiers were killed in the clash. China has acknowledged it also suffered casualties.

Both sides have since sent tens of thousands of troops to their disputed frontier in the Ladakh region and are digging in for a long, hard winter in the freezing high-altitude area.

India is shopping for US cold-weather equipment, officials said, and has also agreed to expand naval manoeuvres in the Indian Ocean next month to include Australia.

Traditionally, the MALABAR exercises have involved India, the United States and Japan.

US officials have said they want the four-nation so-called "Quad" alliance to be given a more permanent structure, in moves that China's foreign ministry said it had "noted".

For Pompeo, India was the first leg of a tour also taking him to Sri Lanka, the Maldives and Indonesia. China's growing investment and influence in Sri Lanka and the Maldives have sparked concern in Washington and Delhi.

Ahead of the visit, Beijing's embassy in Colombo warned Pompeo not to "coerce and bully" Sri Lanka against China. -APP/AFP