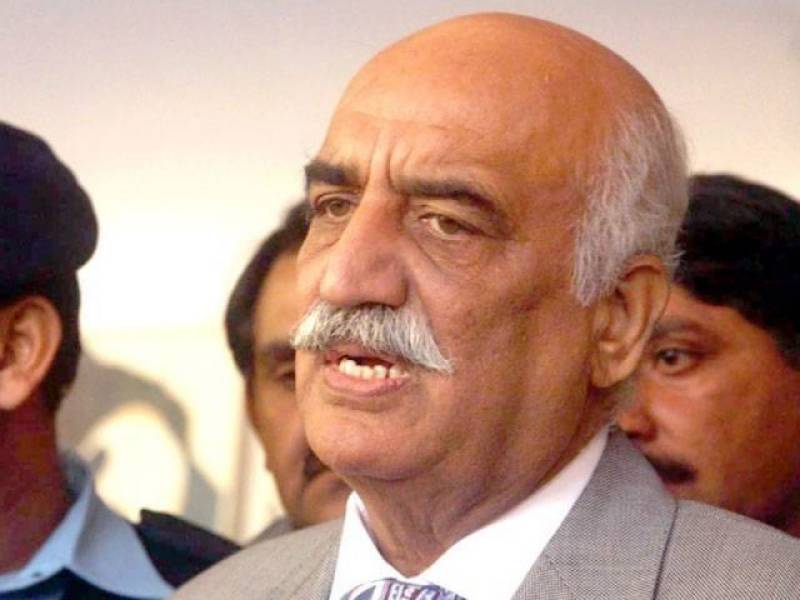 HYDERABAD: (APP) Leader of Opposition in the National Assembly Syed Khursheed Ahmed Shah on Wednesday said a conspiracy was being hatched to derail democracy while the country was passing through a critical time.

Prevailing situation in the country and the region required adopting 'sensible behaviour' but Pakistan Tehreek-i-Insaf chief Imran Khan had started solo flight instead of taking other opposition parties along, he said while talking to media persons here at the residence of Syed Naveed Qamar after attending the 'soyam'  of his father Syed Qamar uz Zaman Shah.

He was accompanied with Pakistan People's Party leaders, including Qamar Zaman Kaira.

The opposition leader said the PPP had reservations about the way Imran was protesting for his demands. His party was fully committed to protecting democracy as the country had already suffered loss due to derailment of the democratic process in the past, he added.

He said the PPP top leadership had sacrificed their lives while other party leaders and workers rendered sacrifices by facing imprisonment and lashes during dictatorial regimes only for the cause of restoration of democracy in the country.

He said the PTI chief should not incite his party workers to do acts which could even be harmful even for them. He should take cognizance of the crucial situation the country was facing and avoid creating more problems for it, he added.

About the allegations being levelled by the PTI chief against him, Khursheed Shah said those were baseless as neither anybody had proved any corruption nor any inquiry in that regard was underway against him.

Replying to a question, he said being the major opposition party, the PPP had used its constitutional right in the appointment of National Accounatbility Bureau chairman. The PPP also wanted accountability process and that was why it had tabled a bill in that regard in the parliament which was also supported by PTI's

Shah Mehmood Qureshi, he added Speaking on the occasion, Qamar Zaman Kaira urged the government to consider the four points of PPP to address the issues being  faced by the country.

He said the PTI chief had the right to protest, but he had opted for sit-ins and agitation despite knowing negative results. Imran Khan was on a solo flight parting ways with the rest of opposition parties, he added.

Replying to a question, he said the reorganization of PPP was under progress and the PPP leadership would announce its strategy on December 27 in that regard.