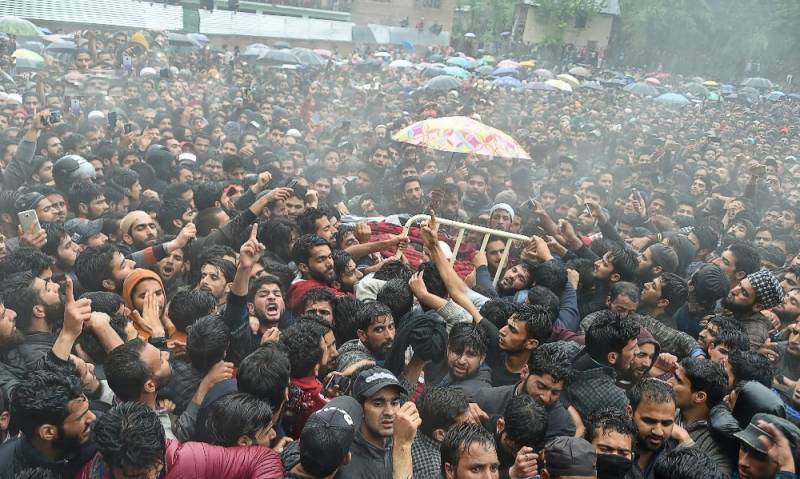 In occupied Kashmir, complete shutdown was observed, today (Saturday), against the killing of prominent mujahid commander, Zakir Musa, and a civilian, Zahoor Ahmad.

Call for the shutdown was given by All Parties Hurriyat Conference Chairman, Syed Ali Gilani.

Shops, business establishments and fuel stations remained closed in Kashmir valley while transport was off the road due to strike.

Indian troops martyred Zakir Musa along with his associate in a clash in Dadsara Tral area of Pulwama district on Thursday.

Zahoor Ahmad, a resident of Naira area of Pulwama district, was abducted and killed by the Indian armed agents on the same day.

Meanwhile, occupation authorities continued to impose curfew and other restrictions in Srinagar, Kulgam and Pulwama for the second straight day, today, to prevent people from staging demonstrations against killing of Zakir Musa.

The authorities also kept the educational institutions closed and train service suspended across the Kashmir valley.

In a statement in Srinagar, Jammu and Kashmir Democratic Freedom Party said Indian Prime Minister, Narendra Modi, must concentrate on resolution of the Kashmir dispute.

It said he should release all Kashmiri political prisoners as a goodwill gesture on or after taking oath of the office for the second term.

An Indian soldier committed suicide by shooting himself with his service rifle at an army camp in Pattan area of Baramulla district, today.

A massive landslide hit the Jammu-Srinagar Highway in Ramban district in the wee hours today, leading to the suspension of traffic.