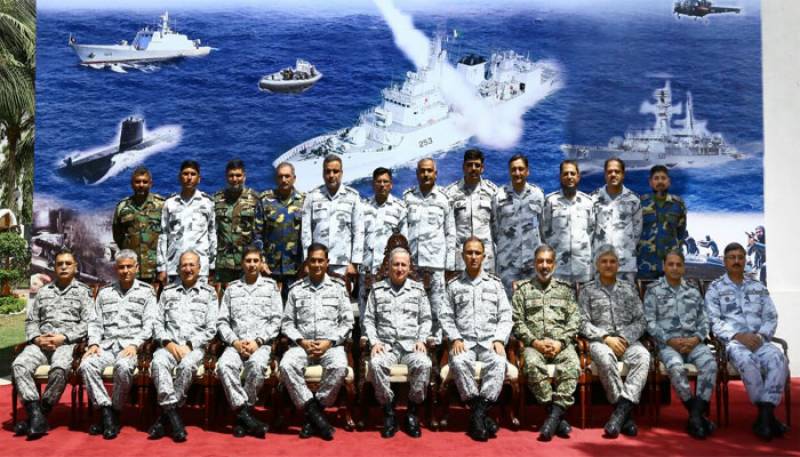 In his remarks, Chief of the Naval Staff expressed his complete satisfaction over the combat readiness of PN fighting units and emphasized that joint operational exercises are essential to achieve desired level of training and readiness for defence of motherland.

In this regard, special emphasis was laid on joint operations by Pakistan Navy in sync with Pakistan Air Force to achieve higher level of synergy between the two Services.

Admiral Zafar Mahmood Abbasi appreciated the efforts put in by exercise participants who proved their mettle while practically manifesting war plans at sea.

The Naval Chief, during interaction with officers and men, also appreciated their morale, level of preparedness and resolve to defend maritime frontiers of the country.

“Challenges at hand necessitate a constant review of our operational plans through extensive war gaming and brain storming processes”, he said.

The Admiral emphasized that Pakistan Navy is a professionally capable and potent force, fully capable to thwart any act of aggression by our adversary.

“We must train hard, strategize well and refine our tactics regularly through frequent exercises and drills”, he further asserted.

Pakistan Navy’s platforms and personnel remain vigilant and combat ready to guard the sea frontiers and defending Pakistan’s maritime interests. PN will continue to hone skills of its personnel through conduct of such joint exercises in sync with other services in future.

RIBAT series of exercises are focused on validating PN war fighting concepts under evolving multi-faceted threats, ranging from conventional to sub-conventional/asymmetric warfare. Another hallmark of this exercise was validation of joint operations of PN and PAF in the Arabian Sea.