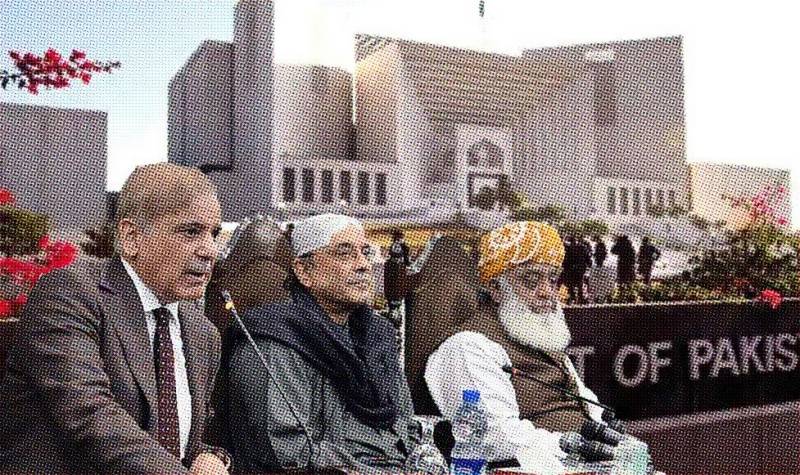 ISLAMABAD – The Pakistan Muslim League Nawaz-led federal cabinet has decided to make rules to regulate the practice and the procedures of the Supreme Court under the constitution of Pakistan.

Leaders from the ruling alliance flocked to the country’s federal capital as they rejected the apex court’s verdict on Punjab chief minister’s election, maintaining that the verdict shocked the hopes of people, legal fraternity, petitioners for justice.

Reports in media said a meeting of the federal cabinet was held under the chairmanship of Prime Minister Shehbaz Sharif.

During the meeting, Sharif-led cabinet exchanged views to discuss the judicial powers in the National Assembly, and the premier directed all legislators to ensure attendance in the House.

The federal government also decided to limit suo motu power of Chief Justice of Pakistan and power to constitute a bench, reports in lcoal media said.

Former PM and senior PML-N leader Shahid Khaqan Abbasi said the army and judiciary should work within their ambit, adding Parliament has the right to limit the powers of the Supreme Court.

Pakistan People’s Party (PPP) Chairman Bilawal Bhutto Zardari also endorsed the opinion of one of his party leaders to make rules to regulate the practice and the procedures of Supreme Court under Article 191 of the constitution.

Earlier, Supreme Court rejected the coalition government’s request for the formation of a full court, and later overruled the election of Hamza Shahbaz from the PML-N as the chief minister of Punjab province and declared Pervaiz Elahi as the winner.