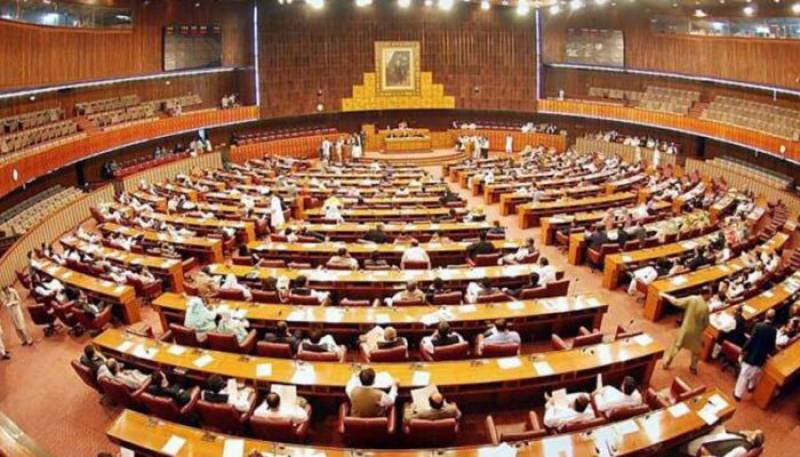 In the National Assembly on Tuesday, treasury and opposition benches expressed the resolve to stand united and shoulder to shoulder with the armed forces to defend every inch of the motherland.

Strongly denouncing the LOC violation by the Indian Air Force, the members said Pakistan does not want war but if war is imposed, the entire nation will stand like a rock wall to give a befitting response to the enemy.

Taking the floor, Minister of State for Parliamentary Affairs Ali Muhammad Khan said India just like the past resorted to cowardly act in the darkness of night but Pakistani Air Force gave a befitting response and forced the Indian aircraft to retreat.

He said Pakistan is a peace loving country but our desire for peace should not be misconstrued as our weakness.

He said Pakistan is a responsible nuclear state, but if India does not refrain from provocations, the Pakistani nation will give a befitting response.

Khurshid Shah of PPP said we stand shoulder to shoulder with the armed forces for the security and defense of the motherland.

He said we are in a war like situation and a joint session of the parliament should immediately be convened to discuss the security situation.

Khurshid Shah said if India can violate Pakistani airspace, we also have the capability to hit far deep inside India.

Khawaja Asif of PML (N) said Pakistan should boycott the OIC meeting in Abu Dhabi where Indian External Affairs Minister has been invited as a guest of honor.

He said our forces and the nation have the capability and capacity to give a befitting response to India.

He supported the opposition’s demand that a joint session of the parliament should be convened to give a joint response to the Indian provocation.  He said an all parties conference should also be held to discuss the current security situation.

Ayaz Sadiq said Pakistan should impose ban on all imports from India.

He said OIC cannot invite anybody to its meetings without consultation with the member countries. He said Pakistan should send delegations to the OIC countries and register protest over the invitation of the Indian external affairs Minister to the OIC meeting.

Khalid Hussain Magsi of Balochistan Awami Party said war has been imposed on us by India.

He regretted silence of the international community on gross human rights violations in occupied Kashmir.

Hina Rabbani Khar of the PPP said the entire world is seeing India as an aggressor and extremist state.

Khurram Dastgir of PML (N) said Pakistan should step up diplomatic efforts to expose the extremist face of India before the world.

Minister for Inter Provincial Coordination, Fehmida Mirza said Modi Junta is perturbed over the importance, Pakistan is assuming in the region because of its strategic position and its role in the Afghan peace process.

Mir Khan Jamali said Pakistan’s peace, stability and prosperity is not digestible to India and that is why it is resorting to such acts.

Naz Baloch of PPP said Modi is doing the politics of hate to win the upcoming elections. She warned that any misadventure by India will have disastrous consequences for the whole region.

In his observation, Speaker National Assembly Asad Qaiser categorically stated that Pakistani nation will defend the motherland till their last breath.

He said Pakistan is a peace loving nation but any foreign aggression will be dealt with iron hands.

He said the world community should take notice of deteriorating situation and tension in South Asia and gross human rights violations in Indian occupied Kashmir.

He said the world should support Pakistan’s overtures for peace and stability in the region.

Syed Javed Husnain of PML (N) said violation of the Line of Control by India is unacceptable. He said Modi is staging such a drama in order to win the upcoming elections.

She said the House will send a categorical message that if India resorted to any other aggression, then we will launch ‘Raddul Bharat’ on the pattern of Raddul Fassad operation.

Shahida Akhtar Ali of MMA said the morale of our forces is very high and they are second to none.

Agha Hassan Baloch of Balochistan National Party regretted that despite peace offers by Pakistan, India has resorted to aggression.

Minister for Communications, Murad Saeed said this House has sent a loud and clear message to world that Pakistani nation knows how to defend the geographical boundaries of the country.

He said important countries such as Saudi Arabia, the UAE and Turkey stand behind Pakistan.

Abdul Qadir Patel of the PPP said we have full confidence in the capabilities of our armed forces.

He said Pakistan is the land of martyrs and Ghazis and our people have always proved their resilience against all odds.

Minister of State for Climate Change Zartaj Gul said Indian hostilities towards Pakistan are not new as they have never accepted creation of Pakistan.

She said Modi’s war doctrine is not in the interest of the region.