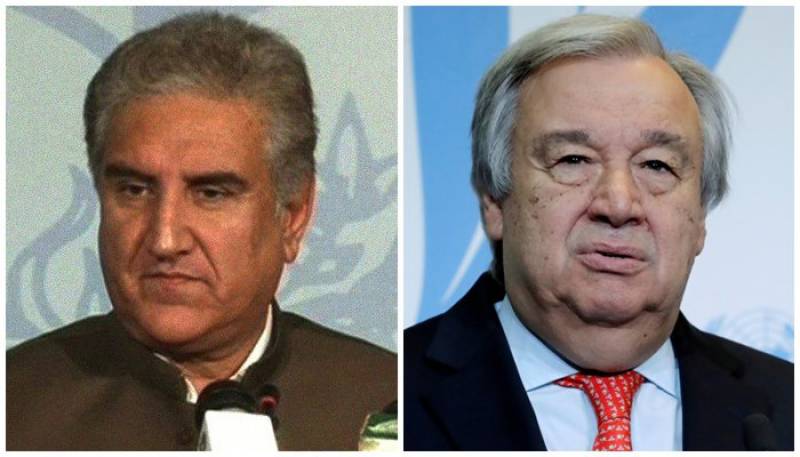 Foreign Minister Shah Mehmood Qureshi in a letter to the UN Secretary General Antonio Guterres has invited his attention towards the deteriorating security situation in the region in the wake of violation of Pakistan's airspace by India.

He said that this aggressive act by India has severe repercussions for the regional peace and security.

The Foreign Minister said the Indian government is issuing threatening statements in the aftermath of Pulwama incident on the pretext of terrorism just to divert the world opinion from its grave human rights violations in Occupied Kashmir.

Foreign Minister Shah Mehmood Qureshi briefed the members of the diplomatic corps about the Indian violation of Pakistan’s sovereignty and territorial integrity in Islamabad.

The Foreign Minister informed the diplomatic corps that at approximately 0254 hours, 6-8 Indian aircraft were effectively intercepted by Pakistani Air Force Jets and forced to scuttle back while randomly releasing their ordnance which landed in uninhabited remote area.

Shah Mehmood Qureshi strongly rebutted the Indian purported claims of having targeted a large terrorist camp and resultant causalities, saying, it is completely absurd and is based on a false narrative designed to placate domestic audience.