In a diplomatic blow for India, China and Russia refuse to name Pakistan in counter terrorism joint declaration despite Indian desperation
27 Feb, 2019 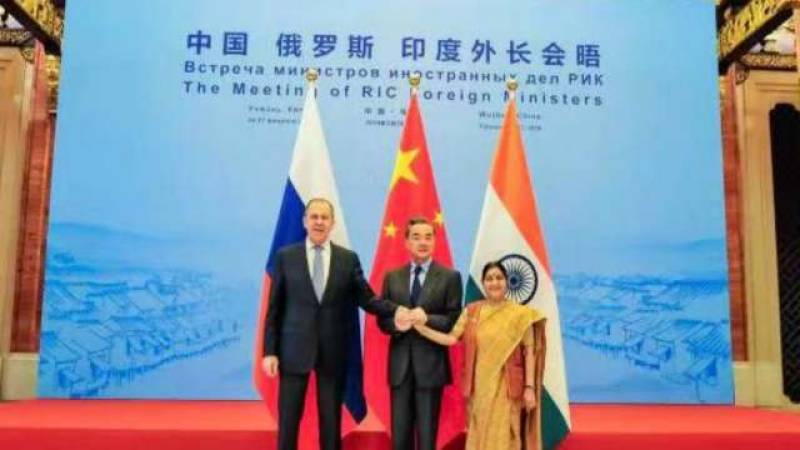 ISLAMABAD - In a diplomatic blow for India, China and Russia on Wednesday refused to name either Pakistan or JeM in the joint declaration over counter terrorism.

All agreed for a closer policy coordination to eradicate the terrorism".

Their commitment came at the conclusion of the Russia, India and China Foreign Ministers' meeting here in the east Chinese city."We agreed to jointly combat all forms terrorism through closer policy coordination and practical cooperation.

Especially important is to eradicate the breeding grounds of terrorism and extremism," Chinese Foreign Minister Wang Yi said at the end meeting summing up the discussions on terrorism.

The Chinese foreign minister highlighted that Pakistan, which is a close ally of Beijing, is also opposed to terrorism.

"China, Russia and India have reaffirmed our strong opposition to terrorism in various forms and manifestations.

At the same time, we believe that Pakistan has always been opposed to terrorism," he said at the joint press conference with External Affairs Minister Sushma Swaraj and Russian Foreign Minister Sergei Lavrov.

Elaborating on China's stand Wang said "on the recent developments between India and Pakistan, China appreciates the statements from Indian and Pakistani friends saying that they will exercise and avoid escalation of the situation." He said China for its part is playing a constructive role as a "mutual friend".

"As a mutual friend to both India and Pakistan, we do hope that they can conduct dialogue to establish facts through investigation to keep things under control, maintain peace and stability in the region.

In this process, China is playing a constructive role and not the opposite," he said.

"As far as the joint strategy is concerned, you just heard foreign minister Wang Yi's speech. What he said during his concluding statement, he reiterated here and he said that we would cooperate on eradicating the breeding grounds of terrorism"."This is not only a common strategy for the three of us, but it is resolution for the three of us.

Wang Yi said this during his concluding remarks and reiterated it here," she said."Terrorism is a threat to the humanity that is why not only for our three countries, we also need a global strategy. We need global cooperation," she said and cited references to terrorism in the joint statement.

"On the one hand we have gained consensus on the UN led counterterrorism mechanism, while alongside we have also discussed the India proposed Comprehensive Convention on International Terrorism (CCIT) mechanism should also be soon finalised and adopted," she said.