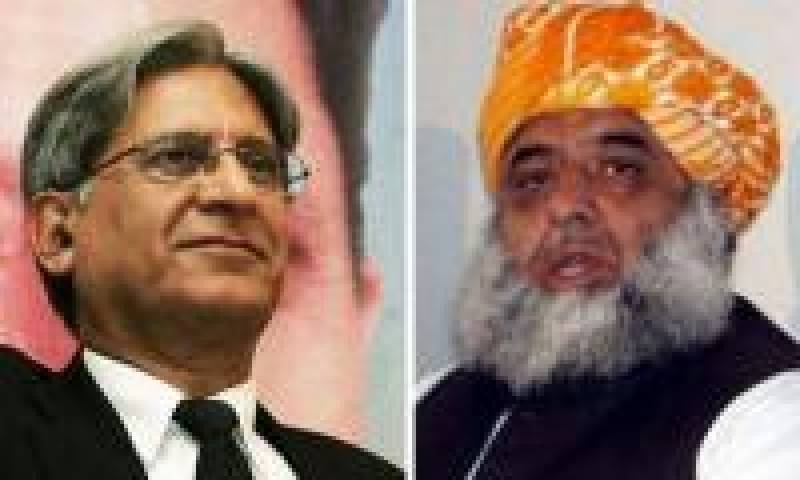 The submission of nomination papers of the veteran PPP politician has killed all the hopes of a strong opposition candidate against Arif Alvi of Pakistan Tehreek-e-Insaf, for the Sept 04 election.

Talking to reporters outside IHC, Ahsan said he was unaware of the PML-N's reservations on his candidacy.

Senator Pervez Rasheed, who is a very respected politician, raised objections of which his party leaders dissociated from during the all parties conference, he said. 'We were told that these were his personal views.'

The PML-N leader, after meeting Nawaz Sharif, Maryam Nawaz and Captain (retd) Safdar in Adiala jail on Saturday, said his party will consider supporting Aitzaz provided he visited the Adiala Jail and apologised to Nawaz Sharif for his harsh remarks against him.

The PML-N called the nomination of Aitzaz as 'unilateral' and an attempt to help the ruling PTI.

To this, the PPP leader said, the party in its internal meeting decided his name as a joint candidate, which was leaked to media angering the PML-N.

Fazl told Shahbaz that the PPP leadership was in no mood to change its candidate. Shahbaz said the PML-N was ready to support either Syed Yusuf Raza Gilani or Raza Rabbani as their joint candidate.

On the other hand, the opposition leader in the last National Assembly Syed Khursheed Shah has called upon the ruling Pakistan Tehreek-e-Insaf (PTI) and all the opposition parties to support Aitzaz as the consensus candidate in view of his services for democracy.

The panel headed by Fazl was assigned the task to give names of three candidates (for the presidential elections) on Sunday. The panel is expected to complete its job Monday morning (today).

According to sources, Fazl supports the PPP’s stance, but the PML-N leaders insist that the PPP should give a new name for the candidate. It may be pointed out that the Election Commission of Pakistan (ECP) will receive nomination papers for the presidential elections by 12 noon on Monday (today).

The nomination papers could be withdrawn by August 30. As such the opposition parties still have three to four days to finalise the name of a joint candidate. Sources said Shahbaz Sharif was still in Murree waiting for a positive response to his party’s demand from the PPP leadership. Meanwhile, Leader of the Opposition in the Senate Senator Raja Zafarul Haq will chair a meeting of the PML-N parliamentary party in the upper house of Parliament at the Parliament House today (Monday).