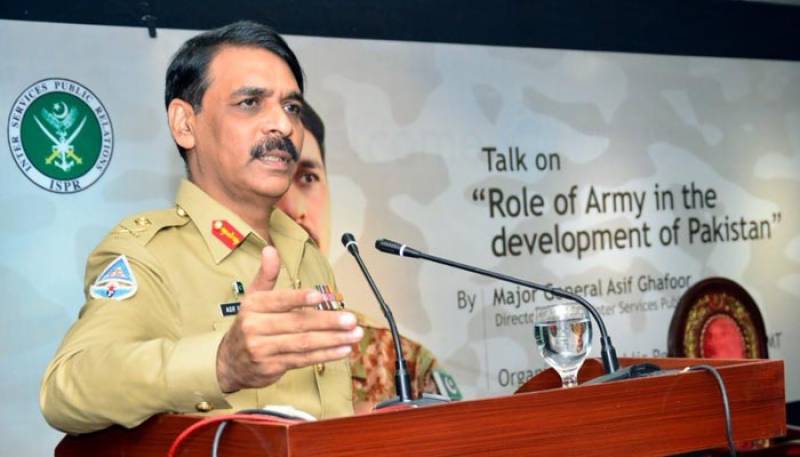 LAHORE - The Inter-Services Public Relations (ISPR) Director General, Major-General Asif Ghafoor said that a propaganda campaign is being launched to create differences between Pakistan Army and the Nation.

He said on Tuesday that the country’s development is not the job of army, even then it is playing its part in the process of national development by constructing roads, hospitals, setting up schools, colleges and universities.

The general was delivering a talk on the topic of “Role of Army in the Development of Pakistan” here at the University of Management and Technology (UMT), Lahore.

The DG ISPR said false propaganda is on the rise against the army aimed at creating gulf between the nation and the army, so the people can start raising questions over the credibility of the institution, but this propaganda he said won’t succeed as Pakistanis have the utmost faith in the army.

Addressing the UMT students and the faculty, Major General Asif Ghafoor said: “In order to know the actual facts, we need to be neutral in judging the news circulating in media especially those on the social media as most of them are not true and are rather fabricated. We must have our own opinion unaffected by others and only believe the stuff which we can see, touch and hear. This is also what Islam tells us to authenticate the information that comes to your way prior to passing it on to others.” He said: “Everyone by nature is fundamentalist and this is ok unless you demonstrate and try to harm others through your behaviour.”