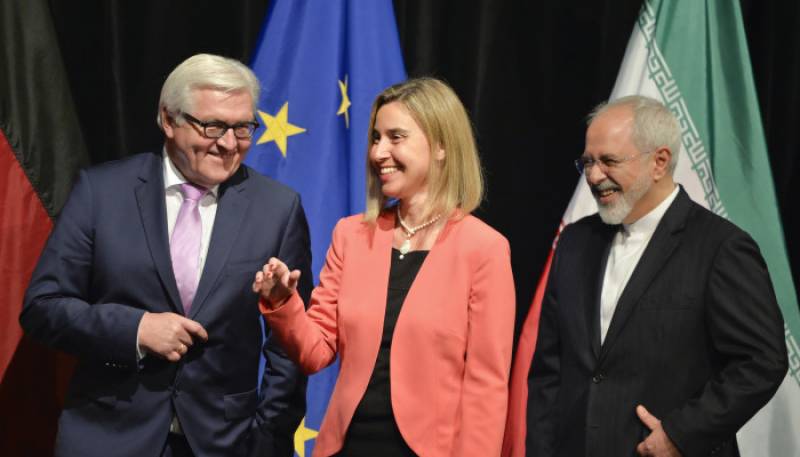 UNITED NATIONS - The European Union said on Monday its members would set up a payment system to allow oil companies and businesses to continue trading with Iran in a bid to evade sanctions after the US withdrew from a nuclear agreement.

Iran and the European Union announced their defiance towards US President Donald Trump's administration after high-level talks at the United Nations among the remaining members of the accord.

The countries said in a statement that they were determined "to protect the freedom of their economic operators to pursue legitimate business with Iran." With the United States and the dollar dominating so much of global trade, the statement said the new mechanism would "facilitate payments related to Iran's exports (including oil) and imports, which will assist and reassure economic operators pursuing legitimate business with Iran."

EU foreign policy chief Federica Mogherini, speaking at the United Nations alongside Iranian Foreign Minister Mohammad Javad Zarif, said the countries were still working out the technical details. "In practical terms, this will mean that EU member states will set up a legal entity to facilitate legitimate financial transactions with Iran and this will allow European companies to continue to trade with Iran in accordance with European Union law and could be open to other partners in the world," she told reporters.

She said that the remaining members of the so-called Joint Comprehensive Plan of Action -- Britain, China, France, Germany and Russia -- would also maintain their commitments to support Iran on civilian nuclear energy.

"The participants recalled that these initiatives are aimed at preserving the JCPOA, which is in the international interest," she said. In line with findings of the UN inspectors, Mogherini reiterated that Iran has been in compliance with the nuclear agreement -- under which Tehran drastically scaled back its nuclear program in exchange for relief from sanctions.

The agreement was sealed in 2015 in a signature achievement for then US president Barack Obama. Trump pulled out of the agreement in May, describing it as a "disaster" and quickly moving to reimpose sanctions on Iran. Despite the protests of the European Union, a number of business including French energy giant Total and carmakers Peugeot and Renault as well as Germany's Siemens and Daimler have already suspended operations in Iran for fear of triggering US sanctions.

With Iran's economy already feeling the pinch, US national security adviser John Bolton earlier Monday vowed to impose "maximum pressure" on Tehran, while insisting that Washington was not pushing for regime change. US Arab allies Saudi Arabia and the United Arab Emirates as well as Israel have long sought for Washington to work to curtail non-Arab and predominantly Shiite Muslim Iran's influence in the Middle East, including in war-torn Syria. The EU move comes a day before Trump and Iranian President Hassan Rouhani separately address the UN General Assembly, with the US leader expected to take a hard line on Iran. - APP/AFP