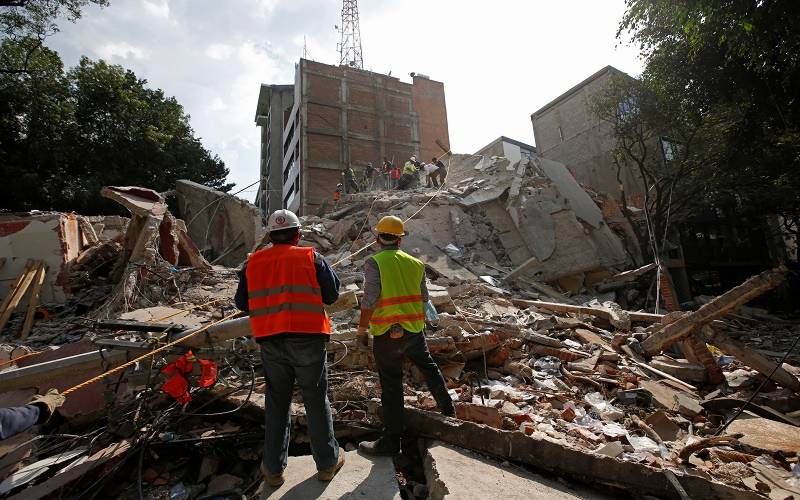 MEXICO CITY, (APP/AFP) - Allegations of negligent construction and oversight began to fly Monday after deadly building collapses during Mexico's earthquake, as hope faded of finding more survivors of a disaster that killed more than 300 people.

The most-watched collapse site -- a school where 19 children were killed last week -- was built illegally on land reserved for housing, according to local media reports.

Mexico City's mayor, the education minister and the top official for the district all traded blame after reports that the Enrique Rebsamen primary school operated using false documents.

"If confirmed, it would be very serious," Education Minister Aurelio Nuno told TV network Televisa, saying he had ordered an investigation.

The government has also come in for criticism from anguished families of people still missing after Tuesday's earthquake.

"All they tell us are lies," said Anel Jimenez, 42, whose cousin Martin Estrada, a 30-year-old accountant, was inside a seven-story office building when it collapsed.

"No one from the government has come to show their face. They just send low-profile officials who always have clean helmets and shiny shoes. They just come to see what they can get out of other people's pain."

Political analysts said the quake underlined the government's lack of credibility, less than a year out from presidential elections.

Just 35 percent of Mexicans approve of President Enrique Pena Nieto's response, according to a poll by the newspaper Reforma.

"This shows the deeply rooted discontent which is likely to continue."

Rescue workers have now wrapped up their efforts at all but five sites in Mexico City, and the chances of pulling any more survivors from the rubble are dim.

But Pena Nieto has been careful to insist that authorities will not send in the bulldozers to start cleanup until rescuers are absolutely certain there are no more people in the rubble.

The building where Estrada's cousin was located, at 286 Alvaro Obregon Avenue in the trendy Roma neighborhood, is now the main search site. It crumpled into a tangled heap of concrete and steel with 132 people inside.

Twenty-nine people were rescued alive from the building in the first days, and 69 across the city.

But since late Friday, only bodies have been recovered.