In a shame, Kashmiris across the World observe Indian Republic Day as "Black Day"
26 Jan, 2019 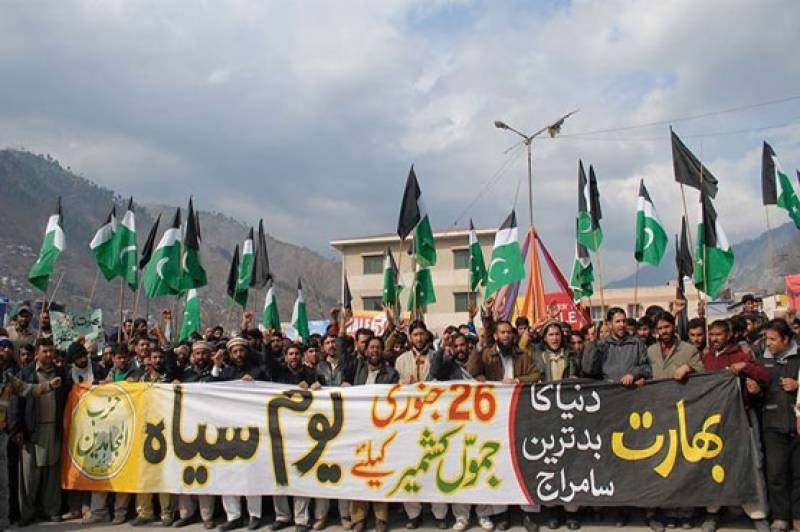 SRINAGAR - Kashmiris across the world are observing Indian Republic Day as Black Day today (Saturday) in protest against India’s continued denial of Kashmiris’ right to self-determination.

The day is being marked with a complete shutdown in occupied Kashmir, anti-India rallies and demonstrations in world capitals.

The Joint Resistance Leadership (JRL) has asked the Kashmiri people to observe complete shutdown on Indian Republic Day, the 26th January, to mark the day as Black Day to remind the world that India’s continued denial of right to self-determination to the Kashmiris is contrary to its claim of being a democratic republic.

The Joint Resistance Leadership in a statement issued in Srinagar said that for past 71 years the people of Jammu and Kashmir had been demanding their right to self-determination promised to them by the Indian leaders not only in the United Nations or the Indian Parliament but also at Srinagar’s Lal Chowk. However, till this day not only has that commitment remained unfulfilled but those who remind them of it are rewarded with bullets and pellets and are incarcerated and gagged, it deplored.

The JRL said that a nation that prides itself on being a representative democracy chosen by the free will of its people, is executing tyranny and suppression to forcibly impose its will over the people of Kashmir. “Lacs of armed personnel are deployed to suppress the aspirations of people and draconian laws like AFSPA and PSA are invoked to ensure people’s sentiments do not get out of hand,” it said.

On the other hand, the puppet authorities have put the entire occupied Kashmir under siege to ensure smooth conduct of Republic Day. Thousands of Indian troops and police personnel are engaged in frisking and checking of vehicles and passengers besides carrying out surprise raids.