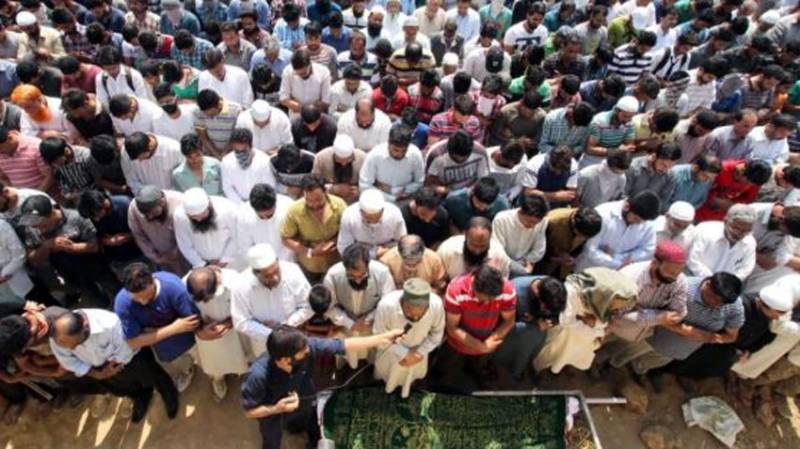 SRINAGAR - In Occupied Kashmir, thousands of people flouting restrictions participated in the funeral prayers of Noor Muhammad Tantray who was martyred by Indian troops in Pulwama district on Tuesday.

The authorities sealed all entry and exit points with barbed wires, and heavy deployment of forces was made to check public movement.

However, people from various areas of the district defied restrictions and arrived in Darganaie area of Aripal to attend the funeral.

The martyr was laid to rest amid pro-freedom and anti-India slogans. Hurriyet leaders including a delegation of Jammu and Kashmir Salvation Movement also participated in the funeral prayers.

Meanwhile, complete shutdown was observed in Tral, Pampore and other areas of Pulwama district to mourn the killing of Noor Mohammad Tantray. All shops and business establishments were closed while traffic was off the roads. The authorities suspended internet and train services in the district.

The Chairman of Jammu and Kashmir Liberation Front, Muhammad Yasin Malik during his visit to the families of martyrs Misra Begum and Asif Iqbal in Handwara and Kupwara said that all pro-India politicians, political parties, leaders and assembly members were responsible for the genocide of Kashmiri people. He said that the sacrifices of Kashmiris would not be allowed to go waste.

Bar members and traders in Baramulla district boycotted India-appointed interlocutor, Dineshwar Sharma. They said that they would not be part of an exercise, which would fetch no result.

On the other hand, Hurriyet organizations including Jammu and Kashmir Muslim Conference, Muslim League and Mass Movement in their separate statements said that the visit by Dineshwar Sharma to Kashmir Valley was a futile exercise.