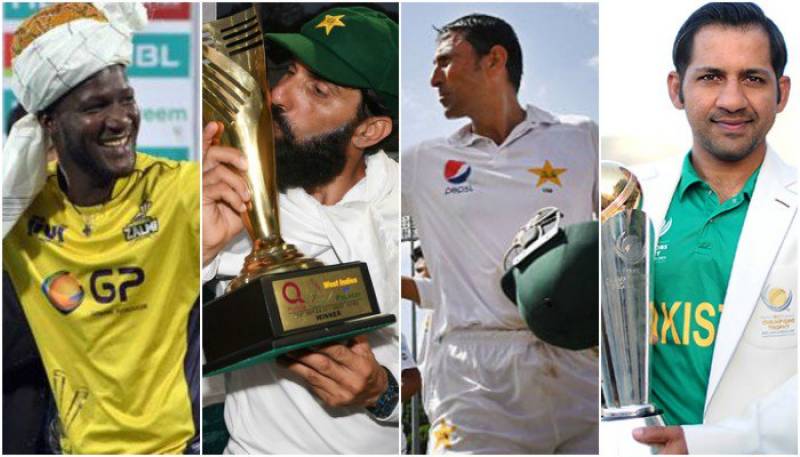 KARACHI: 2017 was, undoubtedly, a game changer for Pakistan cricket, both on and off the field, a year that will be remembered by cricket lovers for many years to come thanks to the new and great heights the country achieved.

The year saw international cricket, finally, returning to Pakistan and the Green Shirts winning the Test series in West Indies for the first time. It saw Younis Khan completing 10,000 Test runs and bidding goodbye to international cricket along with skipper Misbah-ul-Haq. And to top it all, the year saw Pakistan winning the ICC Champions Trophy under the resilient leadership of Sarfraz Ahmed.

The start of 2017 wasn’t on a high note for the team, as it lost the ODI series in Australia by 4-1. The defeat in Australia even put Pakistan on the verge of missing direct qualification for the World Cup 2019.

But the boys didn’t lose hope.

They fought back against the West Indies to win the series 2-1, but the team was still struggling at eighth position in the ICC ODI rankings when it reached England for the Champions Trophy.

Pakistan’s start in the Champions Trophy was heartbreaking, with a heavy defeat by India at Birmingham. But that was Pakistan’s last ODI defeat in 2017. They fought back and never looked back.

Recovering from the initial defeat by India, the Men in Green made a remarkable comeback to defeat South Africa and Sri Lanka to qualify for the semi-final of the Champions Trophy, where they defeated hosts England to qualify for the final.

In the mega-final, it was once again Pakistan vs India. Pakistan defied all odds to outclass India in the final to lift the ICC Champions Trophy for the first time.

The event proved the potential of youngsters Shadab Khan, Hasan Ali, Fakhar Zaman and Rumman Raees, and sealed Mohammad Amir’s status as the spearhead of Pakistan bowling once again.

The team continued its winning streak in ODIs after the Champions Trophy and whitewashed Sri Lanka in the five-match series to end the calendar year on a high with nine consecutive ODI wins.

Young Babar Azam remained Pakistan’s leading scorer in the year by scoring 872 runs in 17 innings with the help of four hundreds and two fifties. Mohammad Hafeez was Pakistan’s second leading scorer with 555 runs, while Shoaib Malik finished third with 516 runs in 15 innings.

Pakistan displayed the same victorious streak in the shortest format of the game, winning all the three T20I series they played.

The team’s first T20I series in 2017 was a four-match series against West Indies, which the Green Shirts won by 3-1.

Pakistan then hosted a historical three-match T20I series at home, Independence Cup, against the World XI, which was led by South Africa captain Faf du Plessis. While the series was more than just a cricket encounter, it also kept Pakistan’s victorious run as the home side defeated the star-studded World XI by 2-1.

The Green Shirts continued their winning run in the three-match T20I series against Sri Lanka, clean sweeping 3-0. After beating the Lankans in the first two matches in UAE, Pakistan outclassed them in the third match as well, played at Gaddafi Stadium, Lahore.

The match in Lahore was the first international game in Pakistan by a high-profile team since the attack on Sri Lankan team bus in 2009.

Pakistan ended the year winning eight of ten T20Is it played in the duration.

Babar Azam, like in ODIs, was Pakistan’s most successful T20I batsman as well. He scored 352 runs in 10 innings, only five short of the overall top scorer West Indian Evin Lewis.

Flamboyant opener Ahmad Shahzad was Pakistan’s second-best and overall the third-best T20I batsman in 2017 with 304 runs off nine innings.

Among Pakistani bowlers, Shadab Khan bagged 14 wickets in 10 T20Is and Hasan Ali claimed 12 wickets in nine T20Is during the year, to remain Pakistan’s leading bowlers in the shortest format of professional cricket in the ending calendar year.

The year wasn’t too great for the team in Test cricket. It started with Pakistan’s defeat in third Test of the series against Australia in Sydney by 220 runs. The defeat completed another whitewash by Australia in Australia against Pakistan.

The series against West Indies was memorable. It was the last Test series by the experienced duo of Misbah and Younis Khan. During the first Test of the series, Younis Khan completed his 10,000 Test runs to become the first ever Pakistani batsman to reach the 10K runs club.

Farewell to the legendary duo of MisYou

Pakistan won the Kingston Test, West Indies won the Bridgetown Test. The third Test at Roseau saw a great contest between the two teams with West Indies fighting hard to save the series. But towards the end of the match Yasir Shah managed to orchestrate a historic win for Pakistan, handing his country its first ever Test series win in West Indies.

Sarfraz Ahmed took the charge of the Test team after Misbah’s retirement. His first assignment as Test skipper didn’t go too well and Pakistan lost both the Tests in UAE, against Sri Lanka.

Azhar Ali was Pakistan’s most successful batsman in 2017 with 504 runs in six Tests, while Sarfraz Ahmed scored 350 runs in 11 innings of six Tests.

While Pakistan remained world beaters throughout the year in limited overs format, the performance in the longer format, the Test cricket, remained a cause of worry for Pakistan cricket fans.

Another event for the fans to remember from 2017 was the historic Pakistan Super League (PSL) final in Lahore – the game that opened the doors for international cricket in the cricket-starved country. Peshawar Zalmi defeated Quetta Gladiators in the final, but most importantly, cricket defeated terrorism on that day.