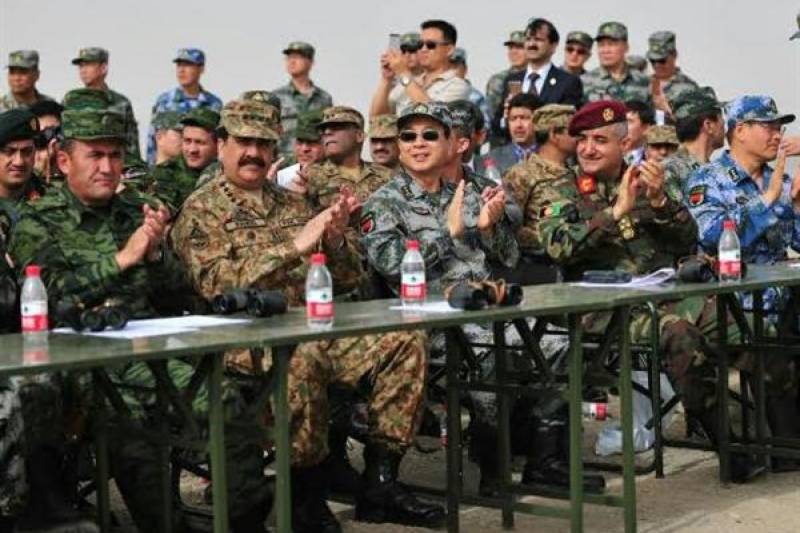 BEIJING - China, Pakistan, Afghanistan and Tajikistan under a multilateral framework will carry out joint exercise and training on the counter-terrorism focussing on real combat experiences this year, Spokesman of Chinese Defence Ministry, Senior Colonel Wu Qin said on Thursday.

“We will organize several joint exercises and training focusing on real combat experiences and carry out cooperation within multilateral framework such as China, Pakistan, Afghanistan and Tajikistan cooperation and coordination on joint counter-terrorism as well as Shanghai Coordination Cooperation (SCO) in joint efforts to further promote and press for fruits out of substantial cooperation between the two sides in various areas,” he said while responding to a question asked by APP Correspondent during a monthly press briefing held here.

The spokesman informed that this year, the Chinese and Pakistani armed forces will maintain the good momentum of high-level exchange and actively carry out mechanized exchanges between the services and institutions. About the meeting between Defence Minister Engr Khurram Dastgir and his Chinese counterpart, Wei Fenghe on the sidelines of the Defence Ministers meeting, he said that he noticed that the defence ministers of two countries met during the just concluded defence ministers meeting of SCO member-states.

He said both the ministers exchanged views in-depth and reached a broad consensus on the bilateral and military to military relations between the two sides, regional security situation and other issues of mutual concerns.

“As this well known to the world, China and Pakistan are reliable neighbours, brothers, tested by the events of the international community, trusted friends of each other and partners seeking common development,” he added. On the outcome of Defence Ministers meeting of the SCO, he said, it was first meeting after the inclusion of Pakistan and India as full members in the organization. Wu Qian said that Chinese State Councilor and Minister of National Defense General Wei Fenghe presided over the meeting and delivered a keynote speech.

Leaders of the defence ministries and militaries of SCO member states including Russia, India, Kazakhstan, Kyrgyzstan, Pakistan, Tajikistan and Uzbekistan, as well as representatives of the SCO Secretariat and the Executive Committee of the Regional Anti-Terrorist Structure of the SCO attended the meeting. The Belarusian Defense Minister attended the meeting as a special guest. He said the topic for the summit was building a community with a shared future for mankind while seeking development through innovation and cooperation, as General Wei Fenghe pointed out during his speech. Chinese President Xi Jinping, along with leaders from other countries, has put cooperation in security as the top priority, which has, in turn, made the SCO an important force for maintaining world peace and stability.

Gen.Wei Fenghe said that we must earnestly implement the consensus reached by the heads of various states and constantly improve the level of defence and security cooperation. The Chinese Defence Minister also pointed out that building a community with a shared future for mankind is China’s wisdom and plan that focuses on solving human development issues and improving the global governance environment. As the largest comprehensive regional organization in the world today, we must establish the concept of a shared future for mankind and work hard to build shared security for all.

The “Shanghai Spirit” should be well-preserved, while pragmatic cooperation is strengthened in areas such as high-level exchanges, joint military drills, and education, among others. Wei said that we need to establish a united front in the fight against terrorism and jointly safeguard peace in the region and the world.

The spokesman said during the conference, defence leaders summed up the results of cooperation since the 2017 meeting, stressing that the SCO countries should enhance cooperation between defence departments and armed forces to deal with rising threats and challenges in international societies. The Defence Ministers of SCO Countries Joint Communique was signed at the conference, while the defence minister from Uzbekistan signed a collaboration agreement with other SCO country’s defence ministries. Medals of strengthening friendship and cooperation among SCO member states were awarded during the conference.

Wei met with defence ministers of Pakistan, Tajikistan, Kazakhstan, Kyrgyzstan and India to exchange views on deepening military exchange and cooperation, and they participated in the opening ceremony of the 5th “Fanfare for Peace” military music festival, he added. - APP