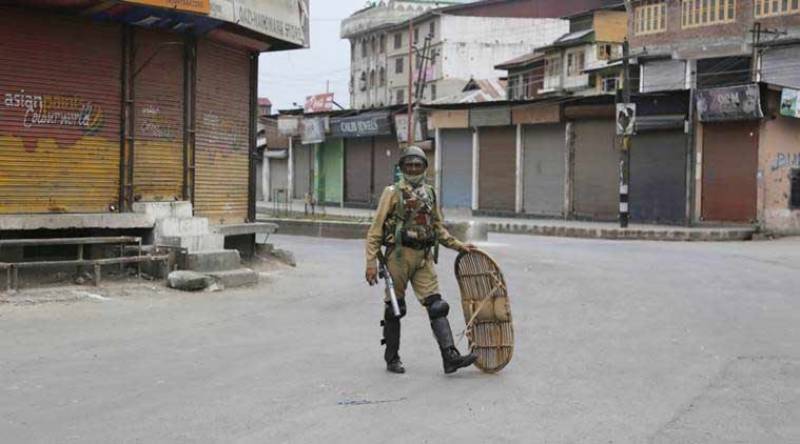 SRINAGAR - Occupied Jammu and Kashmir to witness 2018 as the bloodiest year as per the claims of the former top coup in Kashmir.

Former Jammu and Kashmir Director General of Police Kuldeep Khoda said the killing of over 200 militants in the Valley would not “restore normalcy” in the state and predicted that the year would see more bloodshed than 2017. Khoda, who was J&K’s top cop between 2007 and 2012, was in New Delhi to attend a security conclave, Indian Express has reported.

“The killing of over 200 militants by security forces last year is a clear indication that there are more militants in the valley than previous years,” he said, while blaming “politicisation of events for vote bank politics and polarisation” as primarily responsible for escalation of violence in the valley.

The former DGP also defended the use of pellets guns, claiming it to be the most-effective non-lethal weapon. “In 2010 agitation, we used pellet guns, but there was no outcry. It is possible that the boys (CRPF), who are using these pellets guns now, have not been trained or instructed properly to cause minimum damage,” he said.

A 1974-batch IPS officer from the Jammu and Kashmir cadre, Khoda was appointed the chief vigilance commissioner (CVC) of Jammu and Kashmir in 2013. During his stint as CVC, Khoda said: “I highlighted rampant corruption, nepotism, favoritism in the government. There are certain offices and certain desk where corruption breeds — like (the desks dealing with) scholarship for students, subsidies for various schemes, the reserved/backward area certificate, the revenue documents. We suggested the government to install CCTVs at these desks. If governance is good, lot of irritants mind will be taken care of.” ADVERTISEMENT

Khoda also criticised the government for not being serious about stopping terror funding in the Valley. “In 2010, the Centre set up a committee headed by the Director Intelligence Bureau (IB) and members from other agencies, including RAW and Jammu and Kashmir police, but the committee never met to discuss terror funding,” he said.