CPEC to bring a lot of investment in infrastructure, energy sector: Dar
26 Apr, 2017 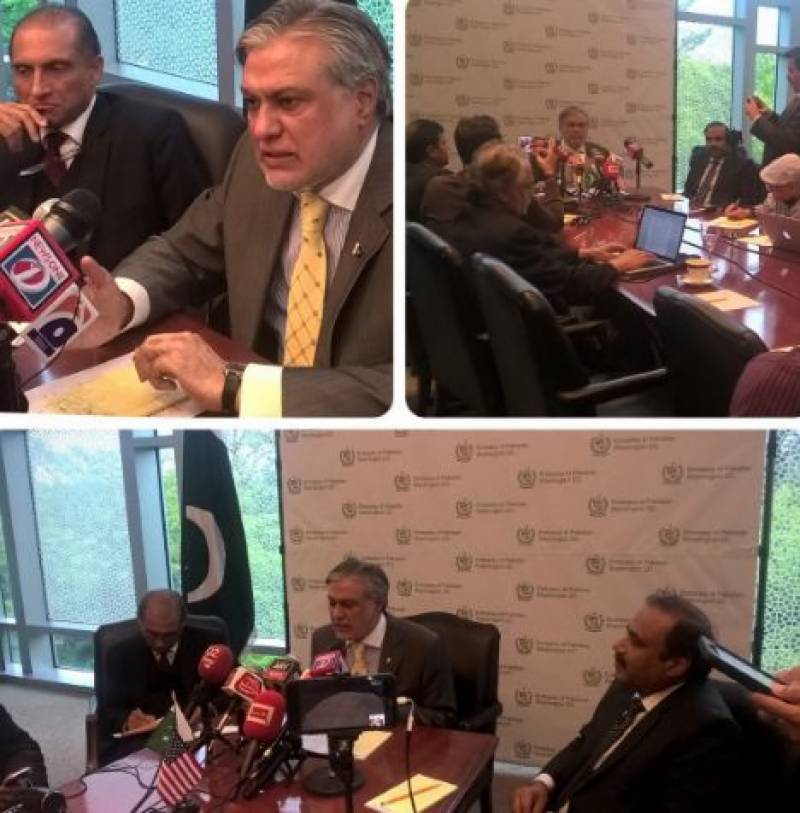 ISLAMABAD: Federal Minister for Finance & Economic Affairs, Senator Mohammad Ishaq Dar has said that efforts for improved regional connectivity and investment holds promise to Pakistan's economic development, still, there is a need to accelerate country's pace of growth to be able to harness the challenges which pose serious threat to the overall economy.

According to the Embassy of Pakistan, Washington DC, the minister in his keynote address to the third session of `Pakistan Embassy Forum`, titled `Economic Reforms and Revival in Pakistan` also underlined the need of early resolution of the Kashmir issue which is vital to the regional peace. The minister is visiting Washington DC in connection with the Spring meetings of the World Bank and IMF. The session was well-attended by participants from think tanks, officials of Washington based organizations and notables of Pakistani American diaspora.

The minister said that Pakistan is looking ahead to work closely with the Trump Administration to further enhance and strengthen bilateral relations between the two countries. Pakistani Diaspora is playing an important role in acting as a bridge between Pakistan and the US to further bilateral relations, Dar added.

Senator Ishaq Dar said that reforms under the present government including structural reforms and fiscal policies have boosted the overall economic growth.

He said that for the very first time, Pakistan has successfully completed the IMF's Extended Fund Facility Program which is a complete break from the past. Over the past few years, Pakistan has significantly improved on economy, energy, extremism and education, he added.

While responding to a question, he said China Pakistan Economic Corridor (CPEC) offers Pakistan an excellent opportunity to upgrade the basic infrastructure of all provinces and will bring prosperity and connectivity to the country. The project will bring in lots of investments into infrastructure and energy sectors, he added.

Earlier in his opening remarks, Ambassador Aizaz Ahmad Chaudhry dilated upon the importance of the event. He stated that Pakistan of today is a resurgent country going through a momentous transformation on both security and economic fronts. Expressing his strong hope with the present government's vision and commitment, he added, Pakistan is on track to record high economic growth and sustainable progress in various socio-economic sectors. (APP)