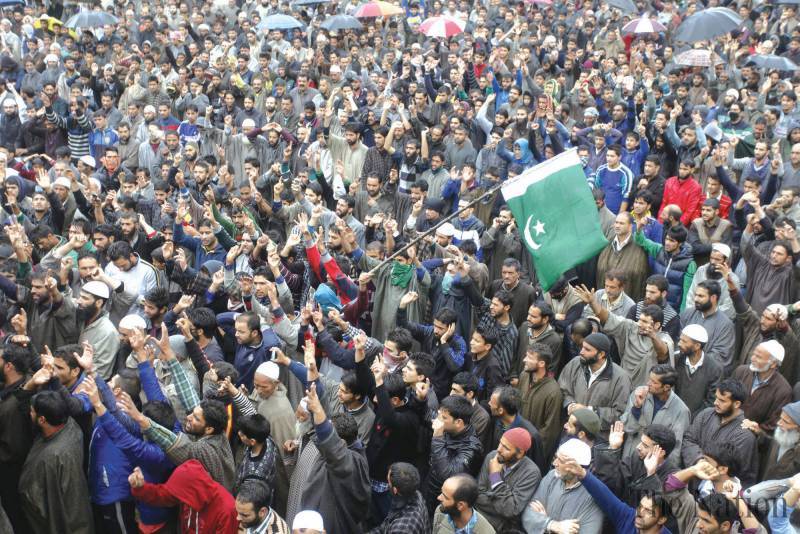 ISLAMABAD: In Indian Occupied Kashmir (IoK), the Joint Resistance Leadership comprising Syed Ali Gilani, Mirwaiz Umar Farooq and Muhammad Yasin Malik has called for complete shutdown on October 27 (Friday), to observe the day as black day to convey the message to India that they reject its illegal occupation of their motherland.

It was on October 27 in 1947 when Indian troops invaded Jammu and Kashmir and occupied it in total violation of the Partition Plan of the Subcontinent and against the aspirations of the Kashmiri people, said a statement issued here.The resistance leaders in a joint statement issued in Srinagar, Tuesday said that October 27, 1947 was an unfortunate day in the history of Kashmir.

Since then, they said, Indian troops have been involved in merciless killing of innocent Kashmiris, destruction of their properties and assaults on women.Meanwhile, a report released by the Research Section of Kashmir Media Service on the United Nations Day on Tuesday said that the World Body had failed to resolve the Kashmir dispute despite the fact that it had passed several resolutions to settle it by holding a plebiscite in Jammu and Kashmir.

The report maintained that the UN had also failed to take cognizance of the fact that Indian troops had killed 94,846 Kashmiris since January 1989 till date to suppress their struggle for right to self-determination.

Earlier today the Indian troops conducted a cordon and search operation in Badgam district. The troops cordoned off Khag area of the district and carried out searches, causing huge inconvenience to the people.

Amid growing incidents of braid chopping, masterminded by Indian agencies, beard of a man was chopped in Batamaloo area of Srinagar. The beard of Farooq Ahmad Butt was cut when he was opening his shop. The victim told media that three men caught hold of him, knocked him unconscious with some spray and chopped off his beard.

Hurriyat leaders, Mukhtar Ahmad Waza, during his visit to Kulgam and Masroor Abbas Ansari in a statement in Srinagar called for settlement of the Kashmir dispute by giving the Kashmiris their right to self-determination, as pledged by the UN.

In another incident in New Delhi, India’s National Investigation Agency arrested Shahid Yousuf, son of United Jihad Council Chief, Syed Salahuddin. Shahid Yousuf was summoned by the NIA to Delhi for questioning in a fake case registered against him in Delhi in 2011. The APHC Chairman, Syed Ali Gilani, in a statement condemned the NIA action.