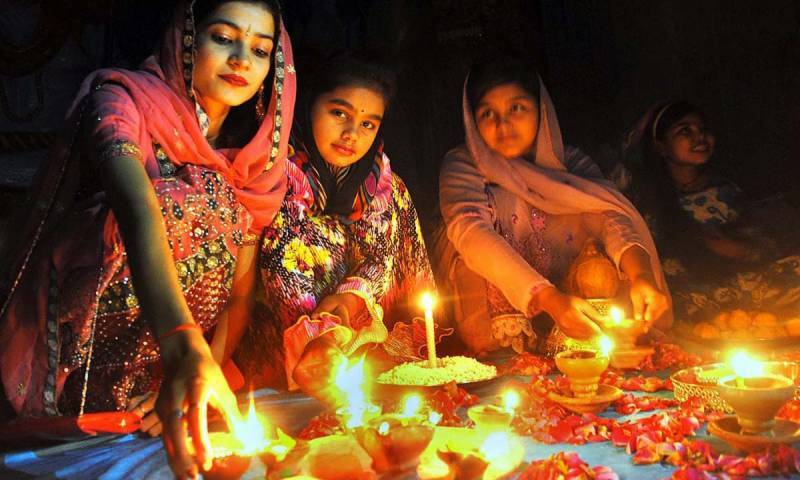 ISLAMABAD: A colourful evening of Dewali - a Hindu festival- was celebrated with zest and zeal by Hindu community here at Pakistan National Council of the Arts (PNCA) on Tuesday evening.

The event was arranged by Ministry of Religious Affairs and Interfaith Harmony to perform religious rituals by Hindu community.

Wearing colourful clothes with facial make-up and jewellery, the girls, children and women of Hindu community, besides others, joined the Diwali festival with religious fervour.

He lauded the Chairman ETPB Siddiqul Farooq for initiating number of projects for the welfare of the non Muslim Pakistanis and said Chairman ETPB also approved two universities which would provide education for centuries.

He also congratulated the Hindus community on Dewali celebrations and said the government officially organize these events to promote interfaith and harmony in the country.

Siddiqul Farooq lauded the performance of Artists of Pakistan National Council of the Arts (PNCA) on the occasion and announced Rs. 100,000 for them as well.

He further said democracy was the only way leading to progress and prosperity.             MNA Asiya Nasir said Diwali was not just a festival; rather, the act of lighting candles means that good had won over evil.

She further said the basic teachings of all the religions rest upon peace and love for human beings.

The artists from Pakistan National Council of Arts performed candle dance and tableau. At the end all participants prayed for the peace, prosperity and harmony in the country.

The artists of PNCA presented 'Arthi and Bajan' on the occasion and got a big applause from the participants. They also presented traditional folk dances and entertained the jam packed auditorium of PNCA.