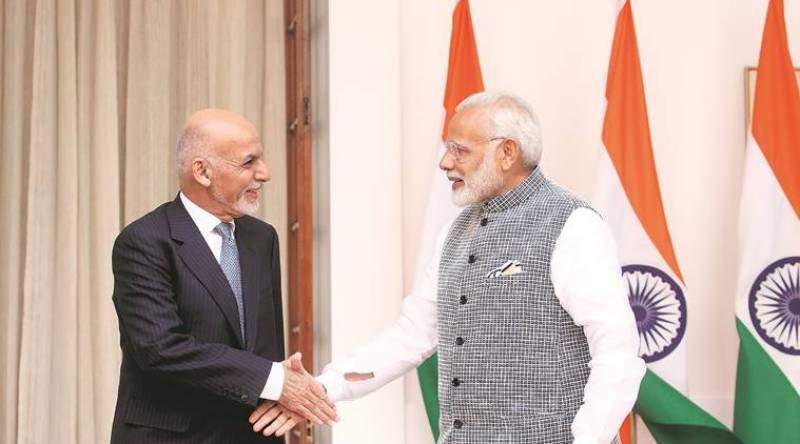 NEW DELHI - India on Tuesday agreed to provide more security-related assistance based on needs of Afghanistan’s defence and police forces after Prime Minister Narendra Modi’s meeting with visiting Afghan President Ashraf Ghani in the national capital. This was Ghani’s fourth visit to India in the last three years, and the 12th personal interaction between the two leaders. Modi and Ghani held detailed discussions in a one-on-one format, restricted meeting, and a working lunch, Indian Express has reported.

While the Indian leadership expressed its support for the negotiated political reconciliation with the Taliban, by saying that it should be “Afghan-led, Afghan-owned and Afghan-controlled”, it only insisted on the redline: “renunciation of violence and terror”. It, however, did not insist on respect for Afghanistan’s constitution.

There were no joint press statements but the official statement put out by the Ministry of External Affairs (MEA) hit out at Pakistan. It said that “closure of cross-border safe havens and sanctuaries were essential for any meaningful progress and lasting peace”.

Ghani said that there has been no progress with Pakistan — that his country had held out a hand of dialogue and peace, but found conflict. “We have told Pakistan that if we don’t get access to Wagah-Attari (border transit point between India and Pakistan), we will block access to Central Asia for Pakistan,” Ghani said while speaking at the Vivekananda International Foundation.

The statement said that the Indian leadership reiterated its support for a negotiated political reconciliation in Afghanistan, which is “Afghan-led, Afghan-owned and Afghan-controlled”. “It was emphasised that renunciation of violence and terror; and closure of cross-border safe havens and sanctuaries were essential for any meaningful progress and lasting peace.” Both sides agreed that the recent convergence and alignment of views at regional and international arenas have created opportunities for bringing peace, security and stability in Afghanistan.

It was agreed to further deepen the bilateral strategic dialogue and consultations at all levels in order to achieve the shared objectives, according to the statement. The New Development Partnership, launched at the meeting of the Strategic Partnership Council on September 11, was assessed as a “significant step” in building upon the “highly successful development cooperation of the past 16 years”, the statement said.

The new-generation India-assisted projects, including in the fields of health, agriculture, drinking water supply, education, renewable energy, infrastructure development, skill development and capacity building, among others, will further contribute to Afghanistan’s reconstruction, economic development and effective governance, the MEA stated. On connectivity, the establishment of the air freight corridor was acknowledged as an important factor in providing Afghan farmers a direct and easy access to the Indian market, the statement said.