Muslim couple thrashed in India by Modi's goons over just suspicion of carrying beef
25 May, 2019 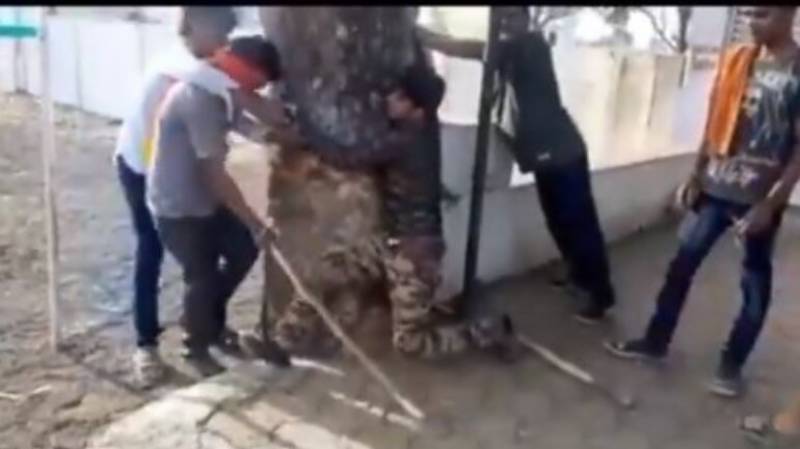 NEW DEHLI – Three people including a Muslim couple were thrashed by self-proclaimed gau rakshaks over rumours of carrying beef in Seoni, Madhya Pradesh.

The victims allege they were forced to say slogans of ‘Jai Shree Ram’ by the accused, reported India Today.

A video showing the goons descending on the youths with sticks has gone viral. In the video, the gau rakshaks held the youths to a tree one by one and beat them up mercilessly as the onlookers stood by.

The goons are also heard shouting at the youths to repeat ‘Jai Shree Ram’ slogans while forcing one of the youths to beat the woman who was accompanying them.

According to police, the incident occurred on May 22 on Mandla Road in Kanhiwada area under Dunda Seoni police station limits.

Police also said that the three people who were beaten up have been arrested as a possession as the sale of beef is illegal in Madhya Pradesh.

One of the accused uploaded the video on social media on May 23, but later withdrew it following a sharp reaction from various quarters, he said.

Reacting on the incident, AIMIM chief Asaduddin Owaisi said, “This is how Muslims are treated by Vigilantes created by Modi voters.”