PM thanks opposition for voting in favour of historic amendment bill
25 May, 2018 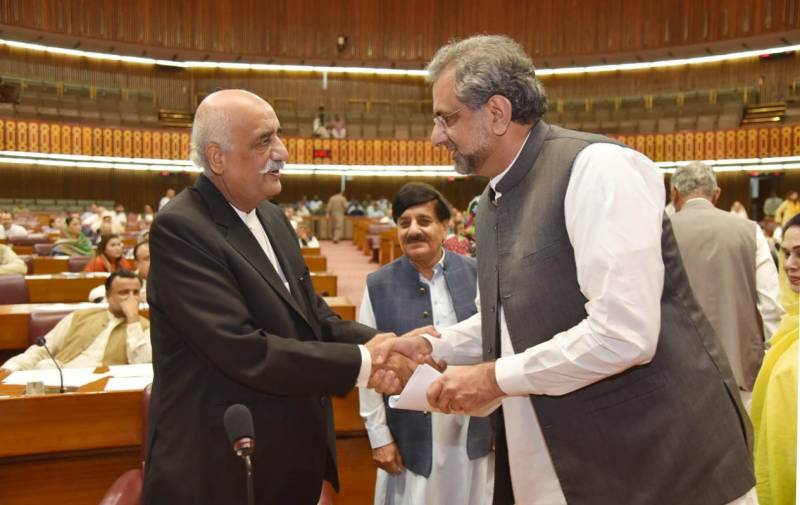 ISLAMABAD: Prime Minister Shahid Khaqan Abbasi has said that the passage of the historic Constitution (Thirty-First Amendment) Bill will have far reaching effects for the whole country.

Speaking in the National Assembly, he said the House today demonstrated national consensus on an important issue and expressed the confidence that other matters faced by the country will be addressed with the same spirit.

The Prime Minister thanked the opposition benches for extending support in the passage of the constitution amendment.

The Prime Minister said that efforts for FATA reforms had been continued over the last four years. He said that committee under the supervision of Sartaj Aziz worked for two and a half years to formulate FATA reforms package.

He said the passage of the bill is just a beginning to bring FATA to the national mainstream. We have to win the trust and confidence of the tribal people by fulfilling the development needs there. He said the PML-N is committed for the fast track development of the area and this House will also have to express commitment towards this end. He said we have to give the same kind of amenities to the people of FATA which are available to the people of other regions. He said there should be no discrimination on the matter of development as tribal people are also equal citizens of the country.

Responding to the points raised by PTI Chairman Imran Khan regarding 2013 elections and the cases against the PML-N leadership, the Prime Minister said there was no need to raise these issues today when the House expressed its solidarity on a difficult issue.  He said that sentiments of the members have been hurt by bringing those controversial issues on the floor of the House.

The Prime Minister said that the fate of political parties will be decided by the people in the elections to be held July this year. He said that all the eventualities have been taken care of in the constitution amendment so that no attempt to delay the next elections succeeds.  He said the government will stay intact till 31st May and then elections will be held in sixty days. This he said was our promise to the people and we still adhere to it.

Earlier, Chairman PTI Imran Khan described the constitution amendment as a big triumph of entire Pakistan which will prove to be vital for overall peace and stability in the country. He said it is also a major step to address the genuine grievances of tribal people who have given immense sacrifices in the war on terror. He proposed that rehabilitation of the tribal people should be done through their local representatives.

Responding to the points of Sahabzada Tariqullah of Jamaat-e-Islamic  the Prime minister assured that the tax exemptions to FATA and PATA will remain available to these areas.

On the points raised by Opposition Leader Khurshid Shah and others on the water shortages in Sindh, the Prime Minister said water distribution among provinces is done on the basis of Water Accord 1991. He said currently ninety percent less water is available in Mangla and Tarbela and water flow has reduced by fifty-four percent as compared to previous years due to less snowfall. He said if a province especially Sindh has any reservation on the water allocation by IRSA it can bring the issue to the Council of Common Interest.  The Prime Minister made it clear that government has nothing to do with the water distribution as it has been done on the basis of vote by IRSA members.

Naveed Qamar of Pakistan Peoples Party said the passage of constitution amendment will help to be an important milestone in bringing the tribal areas at par with other areas of the country. He also expressed satisfaction that all the parties were on the same page on this matter.

Sahabzada Tariqullah of Jamaat-e-Islamic also welcomed the passage of the constitution amendment and expressed the confidence that it will usher a new of prosperity in the tribal areas.

The House will now meet again today at 11 in the morning.