Disgruntled Indian Army Major Gogoi in trouble after arrested by Police with a girl in Occupied Kashmir hotel
25 May, 2018 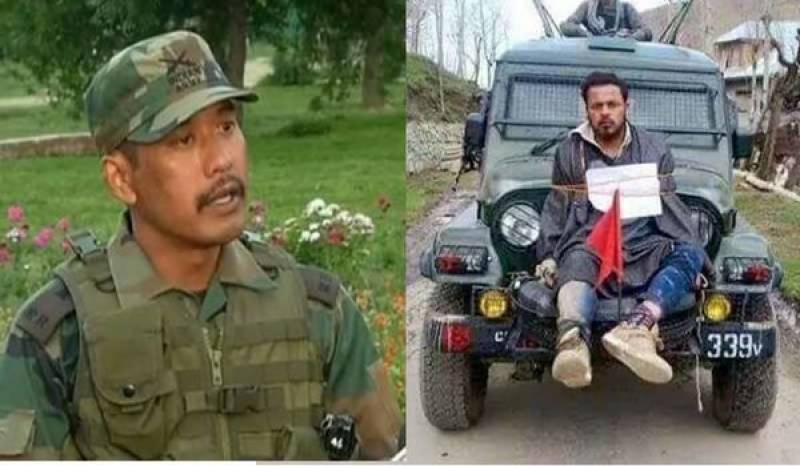 NEW DELHI - The Indian Army has ordered a court of inquiry against Major Nitin Leetul Gogoi, who was briefly detained by police in Srinagar on May 23, after an altercation when he was allegedly trying to enter a hotel with an 18-year-old woman.

The army said that an appropriate action will be taken after the inquiry is finalised.

Earlier in the day, Army Chief Bipin Rawat today said exemplary punishment would be given to Gogoi if he was found guilty of 'any offence'.

"If any officer of the Indian army is found guilty of any offence, we will take strictest possible action," Rawat told reporters at Pahalgham while on a visit to the Army Goodwill School.

"If Major Gogoi has done something wrong, I assure you that he will be awarded punishment at the earliest...the punishment will set an example," the army chief said.

The Jammu and Kashmir Police has initiated an inquiry into the incident involving Gogoi, whose decision to tie a civilian to the bonnet of his vehicle in Kashmir last year sparked a row.

Major Gogoi of 53 RR had shot to fame after he tied 26-year-old Kashmiri artisan Farooq Ahmad Dar with the bonnet of his jeep at Utligam before parading him in different villages on April 9, 2017.

While Major Gogoi defended his actions saying he saved lives and dubbed "Dar as the ringleader who instigated the stone pelting mob", the incident had sparked massive anger and outrage across Kashmir.

Major Gogoi was later awarded the Chief of Army Staff's Commendation Card for his sustained efforts in counter-insurgency operations.