Constitutional amendment passage another fulfilment of PML-N's promise: PM
25 May, 2018 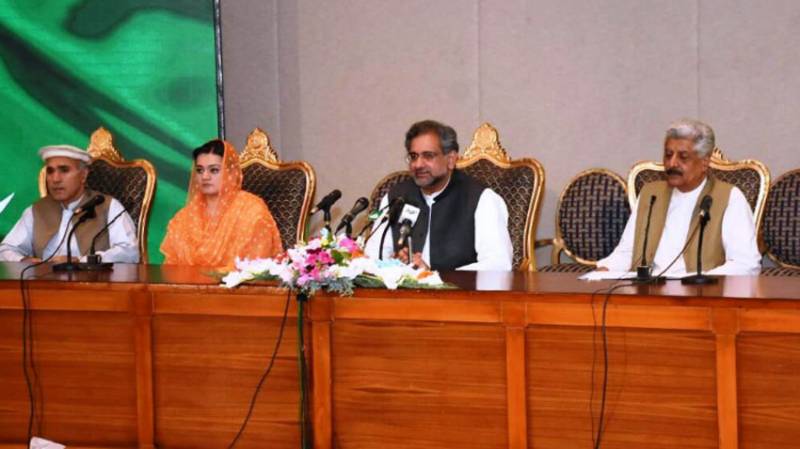 ISLAMABAD: Prime Minister Shahid Khaqan Abbasi says passage of constitutional amendment for FATA's merger with Khyber Pakhtunkhwa is another fulfilment of PML-N's promise made in its manifesto.

Addressing a news conference in Islamabad today, he said the government made efforts to achieve consensus for four years, and today, the amendment has been adopted with two-third majority to mainstream FATA. He thanked all the parties for cooperation in passing the bill in the National Assembly.

The Prime Minister said the amendment will initiate a process to ensure development and equal rights to the people of FATA.

He said one hundred billion rupees per year will be spent for ten years to bring FATA at par with other parts of the country in terms of development and other facilities. He said Khyber Pakhtunkhwa Government will implement this development agenda in FATA.

He dispelled the impression of any foreign pressure for FATA's merger with Khyber Pakhtunkhwa.

Responding to a question regarding nomination of caretaker prime minister, Shahid Khaqan Abbasi said no agreement has so far been reached between him and opposition leader Syed Khurshid Shah about it.

In an interview with a private channel tonight, he said consultations were also made with FATA Parliamentarian and 9 of 11 parliamentarians supported the bill.

Replying to a question regarding interview of former Prime Minister Nawaz Sharif, he said that his interview was misinterpreted.

The Prime Minister said that consensus will be developed for the position of caretaker prime minister in next meeting. He said, otherwise, a committee will be constituted, to which the names will be sent within three days and the majority decision will be implemented.

He said Pervez Musharraf was allowed to go abroad by the court of law and the government will implement all decision of the courts in this regard.