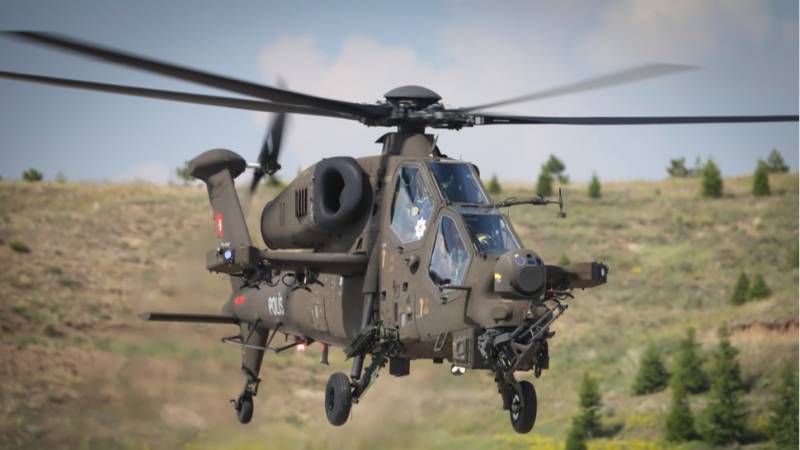 The Philippine Air Force has announced on March 9 the arrival of the first batch of the Turkish-made T-129 ATAK Helicopters.

“The PAF welcomes the arrival of two units of T129 ‘ATAK’ Helicopters onboard the (Airbus) A-400M from Turkey at 30 minutes past midnight March 9, 2022, at Clark Air Base, Mabalacat City, Pampanga,” Air Force spokesperson Lt. Col. Maynard Mariano said in a statement.

Pakistan was among the first countries that expressed their interest in the Turkish attack helicopter, but Director-General of ISPR, Maj. Gen. Babar Iftikhar of the Pakistan Army's Inter-Services Public Relations was quoted saying link , “as far as the Turkish deal is concerned, we have moved on.”

The Philippines has purchased six attack helicopters from the Turkish Aerospace Industries for $280 million.

The T-129 ATAK is an advanced two-seater, twin-engine helicopter designed for attack and reconnaissance missions. It is equipped with 20 mm three-barrel rotary cannon in a nose turret.

Although developed by Turkey, it is derived from Italy’s fabled AgustaWestland A129 Mangusta of Italy. Electronic Warfare

The T1229 ATAK Helicopter is equipped with Electronic Warfare and Countermeasures (ECM) to prevent stinger missiles and javelins from locking onto the gunship.

An ECM is an electrical or electronic device designed to trick or deceive radar, sonar, or other detection systems, like infrared (IR) or lasers. It can be used both offensively and defensively to deny targeting information to an enemy.