Maleeha Lodhi exposes true face of India by calling it "Mother of Terrorism" in her UN speech
24 Sep, 2017 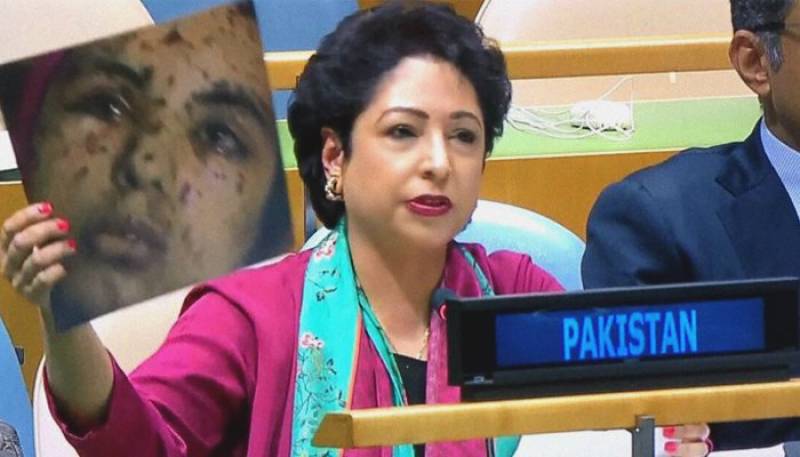 UNITED NATIONS: Maleeha Lodhi — Pakistan’s permanent representative to the UN — during her address to the General Assembly early Sunday morning said India is the mother of terrorism in South Asia.

Voicing her rebuttal to Indian Foreign Minister Sushma Swaraj's comment that Pakistan is a "pre-eminent export factory for terror", Lodhi claimed that India's posture is that of a predator.

Lodhi also emphasised that India — a nation ruled by fascist ideology — should stop supporting and aiding terrorism and related activities across the border.

"Indian leaders have Muslim blood on their hands," she said.

Pakistan calls for an inquiry into the war crimes perpetrated by India in Occupied Kashmir (IoK), the Pakistani UN representative stated, noting that forceful occupation of the troubled, conflict-ridden region is illegal.

"Kashmir is not part of India," Lodhi stressed, adding that the global community needs to collectively make India stop violating the ceasefire arrangement between the two countries.

Ambassador Lodhi said the UN should define terrorism, but said it should include "state terrorism". "The state terrorism which the Indian National Security Adviser (Ajit Doval) has boasted is being sponsored by India's spy agencies in Pakistan's Balochistan province in what he called a 'double squeeze' strategy."

The UN representative said [convicted Indian spy] Kulbhushan Jadhav confessed to subversion in Pakistan, causing terror in the country, and receiving India's aid for the plans.