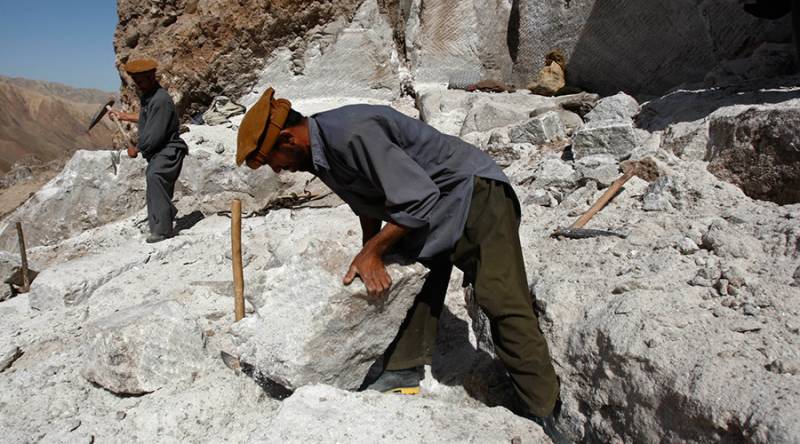 The people of Afghanistan are not going to profit from US mining rare-earth minerals there: it is always going to be the elite in that country and the foreign corporations, said journalist and foreign policy strategist Michael Hughes.

President Trump met with Afghan leader Ashraf Ghani in New York on Thursday to discuss joint efforts to mine the country's mineral resources.

Last month, President Trump outlined his new strategy for Afghanistan with thousands of extra troops and no deadline for a withdrawal, also saying Washington needs to think about its economic interests.According to the US government, Afghanistan has a trillion dollars' worth of untapped rare-earth minerals, including those used in the production of electronics. That is about the same amount the US has spent in the country since the 2001 invasion.

RT spoke to the political analysts who believe the US strategy in Afghanistan is shifting towards commercial goals.

“The only thing I think of is that Trump may be pushing it out of perception so that it looks like there is a good reason to stay,” journalist and foreign policy strategist Michael Hughes told RT.

“More as a pretext than anything, even for the people on the right in his Republican Party that it is profitable to stay here, all the blood and treasure we’ve sacrificed, we should get the minerals, not let China profit all of our hard work. But it is a bit of a fantasy because there is no evidence that there is anything worth mining, meaning after the extraction, many economists say, it may not even be worth the endeavor. It is a pretext,” he continued.

Hughes says the move is a political tactic by Trump to show that there is a good reason for Americans to remain in Afghanistan.

“Does he really believe companies are going to profit of this? I doubt tha

It would not surprise me if the US were interested in trying to exploit mineral resources in Afghanistan because Trump is a businessman and he would naturally take an interest in economic opportunities in Afghanistan. However, I think it would be a very bad idea and very bad policy to try to take advantage of these mineral reserves. It is very tempting, because we are talking about mineral reserves that could be valued up to two-three trillion dollars. But it is very dangerous just because is it safe enough to try to invest all these money and technology in extracting all these mineral reserves when you have a Taliban insurgency that is stronger than it has ever been. - Michael Kugelman, senior associate for South Asia with the Woodrow Wilson Center

Another possible reason for Trump opting to beef up America’s presence in Afghanistan is the growing influence of the political and economic powerhouse in the East.

“That is also part of it – he wants to send a message to China,” Hughes said.

“There are people advising him like American Elements or Michael N. Silver who actually believe that this is all about countering China strategically. These guys have a theory, which I think is crazy, that they need to counter China’s dominance of rare earths in Afghanistan as a place to do it, even if they only corner two percent of the minerals – that is vastly better than letting China hold us “hostage”, so to speak, on rare earth minerals, cause that is what China has done for years,” he claimed.

“There is messaging involved and he is being coached by some people that may be this is a good long-term industrial strategic move. It may take years and decades. But that is a fantasy, too, because no US corporation thinks out that far as China does. China looks at the world in decades, 30-year, 40-year time horizons and the US corporations are looking for a return – they aren’t willing to wait that long,” Hughes said.

Is there any reason to think that Afghanistan would be able to sustain this type of very intensive extractions and excavations of mineral reserves? At the end of the day, if the US were to go ahead and try to get to these mineral reserves, it would be a huge propaganda victory for the Taliban because they would say, ‘Look, the foreign invaders are coming in here to take away all our riches.’ It would literally be true. - Michael Kugelman, senior associate for South Asia with the Woodrow Wilson Center

Hughes also raised the question as to where the funding for US mining in Afghanistan will derive from.

“The Chinese government is willing to make strategic investments. Is the US government and public going to fund these extraction costs and these long-term investments? I think that is a fantasy as well. It is just not the way US companies operate,” he noted.

“To send a message to China and there are some people coaching Trump saying this is going to look brilliant as a long-term strategic industrial policy-type move. That is another factor that is working into it,” Hughes pointed out.

“Let’s face it. It sounds like a cliché and people roll their eyes, but it is neo-colonialism. The Afghans, just like oil in Africa, there is the resource curse: The people are not going to profit –it will always be the elite in that country and the foreign corporations…The Afghans are not going to benefit from this. If anything, it causes a gold rush mentality, and because it’s so valuable it is going to fuel the insurgency, attract insurgents, even though, at the end of the day, the question of profitability remains...

If this is some sort of gambit, like a form of foreign aid, it is totally delusional. It’s corporations selling [the idea of mining] and it is not credible to think this will be for the Afghan people,” he concluded.