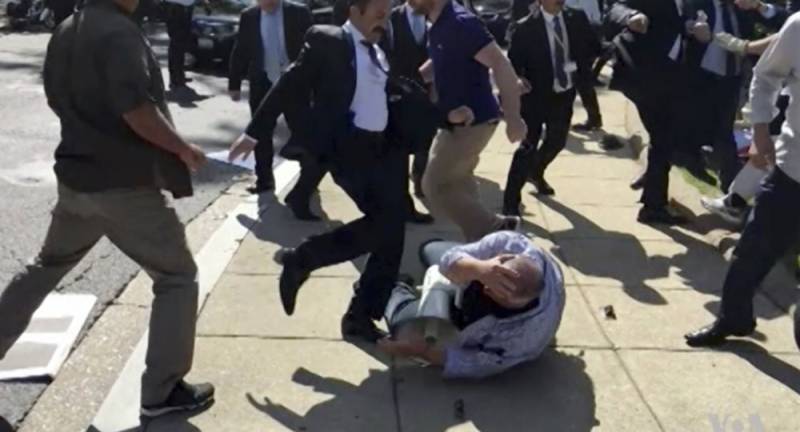 "You're a terrorist, get out of my country," one attendee yelled during Erdogan's speech on the sidelines of the 72nd UNited Nations General Assembly in NYC, before being punched and taken away, according to BBC.

Meghan Bodette, another attendee who had taken part in the action against Erdogan that was staged at the Marriott Marquis Hotel in Times Square, tweeted: "Yes. I stood up with YPJ flag [the all-female Kurdish military group]…was pulled from chair and removed. I got escorted out and ran, some friends were briefly questioned."

Eyewitness Halil Demir said he saw an attendee shoved to the ground after protesting at Erdogan's speech, adding that he later saw another man handcuffed and lying on the floor.

The footage from the speech details several attendees being punched and dragged away by suited men. It is not clear whether security personnel were allied with the Turkish president or if they were hotel employees.

Attendees seeking to disrupt the speech by the increasingly autocratic Turkish leader claimed that they were acting to publicly condemn Erdogan's nationalistic policies at home, and his foreign policy in Syria and Iraq.

Attendees carried flags and banners supporting the Kurdish People's Protection Units (YPG), a Kurdish militant group. The Turkish president views the YPG as part of Kurdistan Workers' Party (PKK) — banned by Erdogan — which has sought autonomy from Istanbul for the past 30 years.

Erdogan has repeatedly condemned the US military alliance with Kurdish forces in Syria against Daesh.

According to the New York Police department, five attendees were "briefly detained," but none were arrested.

On May 11, 11 people were injured and two were arrested in Washington DC after a peaceful protest by opponents of Erdogan outside of the Turkish ambassador's residence became violent as Turkish presidential bodyguards were seen to be given the go-ahead by Erdogan to violently disband the marchers.

DC police described the brawl as a "brutal attack of peaceful protestors."