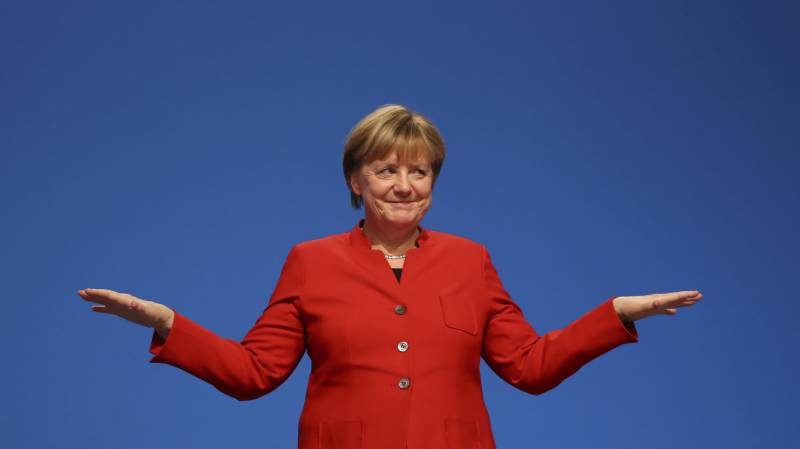 BERLIN- Chancellor Angela Merkel clinched a fourth term in Germany s general election on Sunday, but her victory was clouded by the hard-right AfD party winning its first seats in parliament.

Merkel, who after 12 years in power held a double-digit lead for most of the campaign, scored around 33 percent of the vote with her conservative Christian Union (CDU/CSU) bloc, according to exit polls.

Its nearest rivals, the Social Democrats and their candidate Martin Schulz, came in a distant second, with about 20-21 percent.

But in a bombshell for the German establishment, the anti-Islam, anti-immigration Alternative for Germany (AfD) captured around 13 percent, making it the country s third biggest political force.

The four-year-old party with links to the far-right French National Front and Britain s UKIP has been shunned by Germany s mainstream.

It is now headed for the opposition benches of the Bundestag lower house, dramatically boosting its visibility and state financing.

Alarmed by the prospect of what Foreign Minister Sigmar Gabriel branded "real Nazis" entering the Bundestag for the first time since World War II, the candidates had used their final days of campaigning to implore voters to reject the populists.

"This Alternative for Germany is no alternative. They are a shame for our nation," former European Parliament chief Schulz told a rally in Berlin on Friday.

Germans elected a highly splintered parliament reflecting an electorate torn between a high degree of satisfaction with Merkel and a desire for change after more than a decade of her leadership.

Another three parties cleared the five-percent hurdle to representations: the liberal Free Democrats (around 10 percent), anti-capitalist Left  and ecologist Greens (both at about nine percent).

As Merkel failed to secure a ruling majority on her own, the process of coalition building was shaping up to be a thorny, potentially months-long process.