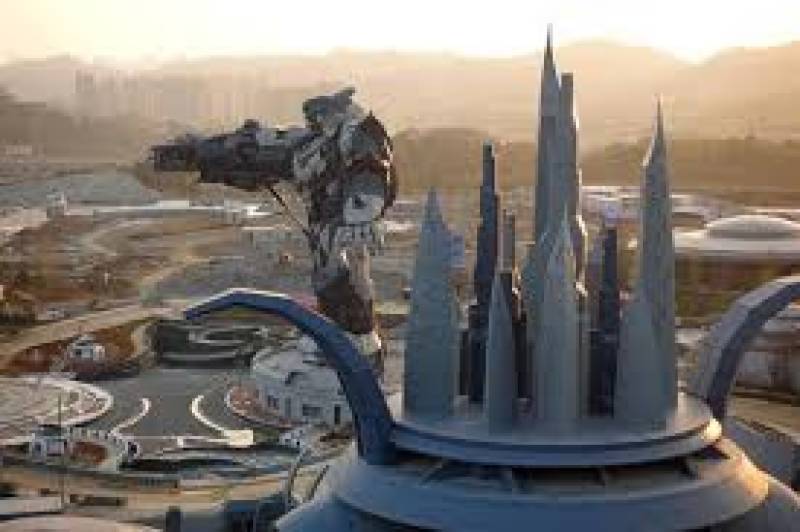 GUIYANG: Giant robots and futuristic cyberpunk castles rise out of lush mountain slopes on the outskirts of Guiyang, the capital of one of China’s poorest provinces.

Welcome to China’s first virtual reality theme park, which aims to ride a boom in demand for virtual entertainment that is set to propel tenfold growth in the country’s virtual reality market, to hit almost $8.5 billion by 2020.

The 330-acre (134-hectare) park in southwestern Guizhou province promises 35 virtual reality attractions, from shoot-‘em-up games and virtual rollercoasters to tours with interstellar aliens of the region’s most scenic spots.

“After our attraction opens, it will change the entire tourism structure of Guizhou province as well as China’s southwest,” Chief Executive Chen Jianli told Reuters.

“This is an innovative attraction, because it’s just different,” he said in an interview at the park, part of which is scheduled to open next February.

The $1.5-billion Oriental Science Fiction Valley park, is part of China’s thrust to develop new drivers of growth centered on trends such as gaming, sports and cutting-edge technology, to cut reliance on traditional industries.

In the push to become a center of innovative tech, Guizhou is luring firms such as Apple Inc, which has sited its China data center there, while the world’s largest radio telescope is in nearby Pingtang county.

The park says it is the world’s first of its kind, although virtual reality-based attractions from the United States to Japan already draw interest from consumers and video gamers seeking a more immersive experience.

The Guiyang park will offer tourists bungee jumps from a huge Transformer-like robot, and a studio devoted to producing virtual reality movies. Most rides will use VR goggles and motion simulators to thrill users.

“You feel like you’re really there,” said Qu Zhongjie, the park’s manager of rides. “That’s our main feature.”

China’s virtual reality market is expected to grow tenfold to 55.6 billion yuan ($8.4 billion) by the end of the decade, state-backed think-tank CCID has said.

Farmers in the nearby village of Zhangtianshui said they were concerned about pollution from big developments, but looked forward to the economic benefits a new theme park would bring. Most were less sure about virtual battles or alien invasions, though.

“There are lots of good things that come out of these projects,” one farmer, Liu Guangjun, told Reuters. “As for the virtual reality, I don’t really understand it.”