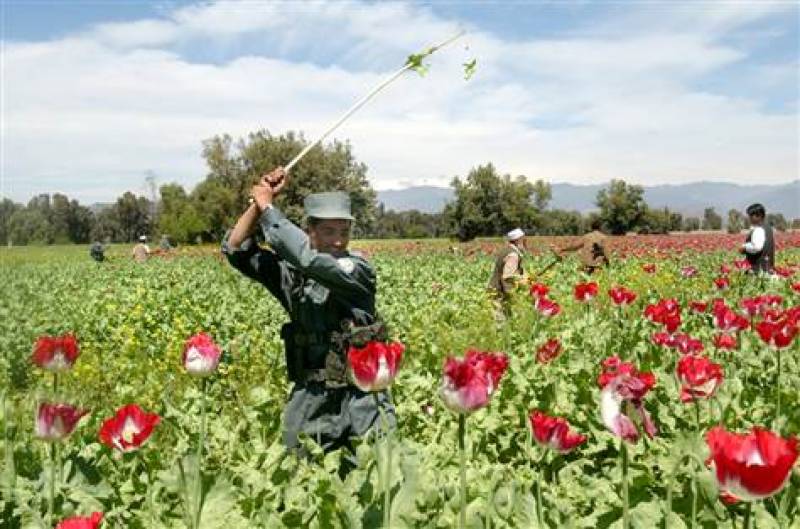 ISLAMABAD: The Afghanistan Government needs to take urgent steps for eradication of poppy cultivation, law enforcement, provision of alternative livelihoods, and public information campaigns to end the production of opium in line with International Drug Conventions.

Spokesperson of Foreign Office Muhammad Faisal responding to a query during the weekly media briefing said that Pakistan had consistently raised serious concerns about the increase in cultivation and production of opium in Afghanistan. We are especially concerned about the links between narco-trade and terrorism, as narco-trafficking is considered to be one of the major sources of terror financing in Afghanistan, he said.

The issue of opium cultivation and drug production poses a serious threat to the socio-economic development, security and stability not only of Afghanistan, but also in the surrounding region, he said.

According to the United Nations Office on Drug and Crime (UNODC) the production of opium in Afghanistan had increased by 87 per cent in 2017, as compared to the year 2016.

When his attention was drawn to the recent statement of Afghan Chief Executive, Abdullah Abdullah in which he had admitted that Tehrik-i-Taliban Pakistan  (TTP) had a strong foothold in Afghanistan, which is an acknowledgment of Pakistan’s stance that TTP operated from Afghanistan to create instability in Pakistan, Dr. Faisal said that Pakistan had repeatedly highlighted the fact that TTP, JUA, Daesh and other terrorist groups had established sanctuaries in Afghanistan and were involved in terrorist attacks inside Pakistan.

The leader of TTP Swat, Mullah Fazal Ullah, the mastermind and perpetrator of the Peshawar Army Public School was hiding in Afghanistan.

Additionally, he said, we had information, that RAW had developed a robust network with the TTP, JUA and other terrorist groups in Afghanistan and they were being used for subversive activities in Pakistan. We have shared evidence with the Afghan side and expect Afghanistan to take action against those terrorist groups. Afghanistan should not allow its territory to be used by India against Pakistan, he added.

When asked about the denial of visas by Swiss Embassy to  a number of senior officials including a retired Justice and Speaker of Baluchistan Assembly, who were part of a delegation that was proceeding to Geneva, he said initially, there was some mis-communication about visa applications of Pakistani senior officials, who were scheduled to travel to Geneva for official meetings. However, the Swiss Embassy opened its office on Saturday (November 11, 2017) and entertained the applications submitted to it.

Responding to a query regarding award of contract for issuance of visa by Pakistan’s High Commission, London, he clarified that no decision had yet been taken in awarding any contract on the subject.

The existing 5 years contract with Gerry’s Offshore Incorporation Limited expired in May 2017. In order to undertake the process for selection of a new service provider in a transparent manner and as per the PPRA rules, a Committee of Officers was constituted at the high commission in June 2016.

The Expression of Interest (EOIs) were invited in November 2016, he explained.

The selection criteria clearly stipulated that the company should either have relevant experience or demonstrate the ability to deliver the requisite services. The shortlisted firms were also scrutinized and cleared by the  agencies concerned in Pakistan, he added.

He further explained that after their security clearance, the shortlisted firms were invited for financial bidding. The bids were opened on November 10, 2017 at the High Commission.  In order to ensure complete transparency, all the bidders were asked to bring their bids along, which were opened in presence of representatives of all the bidders and the Committee members.

The lowest bid would now be sent to the Ministry for approval. Once approved by the Ministry, a draft Service Agreement between the High Commission and the service provider would be sent for concurrence by the Ministry of Law and Justice, he said.

When asked about the reported prohibition of the entry of Mehran Marri into the Switzerland stating that he was a leader of a terrorist organization and posed a threat to internal and external security of Switzerland, Dr. Faisal said. We continue to impress upon friendly countries to deny space to all those who directly or indirectly threaten sovereignty and territorial integrity of Pakistan.

We are determined to redouble our efforts in this regard. Switzerland has realized that Mehran Marri was a threat to their national interest/security and decided to deny him entry. It is not in favour of any country to allow terrorists on its soil, he said.

To a question about India’s recent letter to Pakistan in Commander Kulbhushan Jhadev’s case, he said that Pakistan offered a meeting to Commander Jadhav’s wife, the next of kin, on purely humanitarian grounds. India has requested that the mother may be allowed to accompany the wife.  The Indian request was under consideration, he added.

When asked if Afghan side had shared any update on the investigations of Shahadat of Nayyar Iqbal Rana with Pakistan, he said that Pakistan’s Ambassador in Afghanistan had held meetings with relevant Afghan authorities, who are still investigating the matter.

About a question about death sentence by Bangladesh government to people who were involved in the freedom struggle during 1971 war, spokesperson said that Pakistan is deeply concerned over this development. We hope and expect that the government of Bangladesh should uphold its commitment, as per the Tripartite Agreement of 1974, wherein it "decided not to proceed with the trials as an act of clemency”.

Pakistan believes that matters should be addressed with a forward looking approach in the spirit of reconciliation, he added.

To another question, he said, It is regrettable that India continued to politicize humanitarian issues including provision of medical visas for Pakistani patients since May 2017.

It is all the more reprehensible as these patients, many of whom have been consulting Indian doctors for a long time are seeking treatment, often lifesaving, on their own expense without any special discount from India - I repeat on their own expense.

No one is fooled by Indian gimmickry. This is not a gesture of compassion but cold blooded politicking under which individuals are picked at will for political mileage, he added.

About the Iran earthquake, Dr. Faisal said that Pakistan had dispatched a C130 aircraft carrying relief assistance for the affectees of the deadly earthquake that struck Iran on November 12, 2017.

The relief assistance consists of the items identified by the Iranian side in accordance with the relief requirements in the earthquake affected area.  The aid consignment from Pakistan was the very first cargo transported to Iran for the earthquake victims.

Responding to a query he said Pakistan was deeply concerned about the presence of Daesh in Afghanistan, particularly when more than 43% of the Afghan territory remained ungoverned, and served as an abode to terrorist sanctuaries.

He said that Pakistan had held numerous conferences with reference to the Jammu & Kashmir dispute, particularly since the July 8 shahadat of Burhan Muzaffar Wani. The Government of Pakistan sent special envoys to all the major capitals of the world to raise awareness about the gravity of situation in Indian Occupied Kashmir and urged the international community to call upon India to immediately halt the bloodshed of innocent Kashmiris.

Moreover, members of civil society, Parliamentarians and human rights activists across Europe, Nordic States, Australia and North America had also underscored India’s excessive use of force and atrocities in Indian occupied Jammu & Kashmir to their host Governments and people.

He said,”Let me assure you that the Government of Pakistan is doing its utmost to highlight the issue of Jammu & Kashmir to the international community, and call upon India to stop its massive human rights violations, including killing, dishonouring, maiming and blinding of innocent and defenceless Kashmiris.”

The US Congress recently passed the National Defence Authorization Bill for fiscal year 2018 which included provisions for reimbursement of $700 million to Pakistan under the Coalition Support Fund (CSF), he said. The conditionality with regard to HN is not new and was also part of previous authorizations. Efforts to stretch this conditionality by adding other organizations did not succeed, he added.

He said that Pakistan and the US were engaged in discussing all issues of mutual interest including advancing peace and stability in the region. More than 43% of Afghan territory is ungoverned, which created space for sanctuaries and safe havens for terrorist outfits, he explained.

He said that Pakistan was monitoring the situation in the Korean Peninsula and shared the concerns over the tensions in the region. Pakistan supports the resolution of the issue through peaceful means.

“We encourage DPRK and RoK to resume meaningful negotiations for this purpose. Pakistan also supports the resumption of Six-Party Talks process at an early date to reduce tensions. Pakistan welcomed the two Summits between DPRK and RoK in June 2000 and in 2007.”

It has been Pakistan’s consistent position that all the relevant parties should comply with their international obligations, pursue the path of dialogue and diplomacy to reduce tensions, refrain from any action that is inimical to peace and stability in the region and work towards achieving a comprehensive solution, he said.

About the visit of Secretary of Defence, James Mattis, he said it is expected in the next few weeks and the diplomatic channels are working on mutually convenient dates for this visit.

We have at multiple occasions shared intelligence with Afghanistan and the US regarding the presence of terrorists along the border with a request to take action and not let Afghan territory be used against Pakistan, he added.