Pakistan chastises India at the United Nations
24 May, 2019 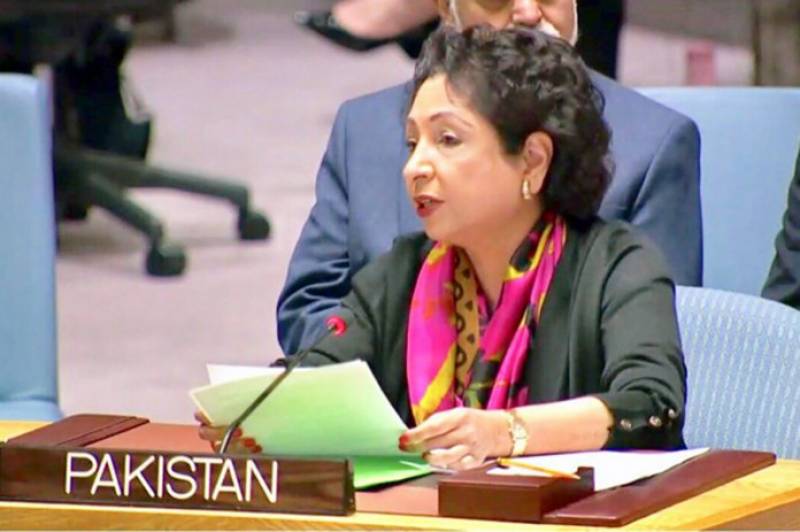 UNITED NATIONS - Pakistan on Thursday brought into sharp focus of the world community the atrocities being committed by Indian occupation forces in Jammu and Kashmir, and urged the UN Security Council to resolve long-standing conflicts on its agenda.

“Inaction by the Security Council in cases of foreign aggression and occupation comes at a high human cost,”Ambassador Maleeha Lodhi said in an open Council debate on ‘Protection of Civilians in Armed Conflict’, referring to the continuing violations of International Humanitarian Law by warring parties with impunity.

“In Indian occupied Jammu and Kashmir,” the Pakistani envoy said, “the occupying forces continue to show utter disregard for human life by systematically violating the fundamental norms of international humanitarian law and by using civilians as human shields.

“Worse, perpetrators who commit such crimes are not only protected under black laws, but are honoured by the military command.”

The rules of conduct in armed conflict are clearly codified in the 1949 Geneva Conventions and additional protocols and constitute the bedrock of international humanitarian law, she said. Yet this law continues to be flouted whenever and wherever hostilities break, with women bearing the brunt of the atrocities.

“Whether it is plausible deniability or abuse, the grim reality is, when the beast of conflict roars, legal regimes fall silent,” Ambassador Lodhi told the Security Council.

In this context, the Pakistani envoy pointed out that reports of the use of torture as an instrument of repression in Indian occupied Jammu and Kashmir have been verified by the Special Rapporteur on Extrajudicial Executions and Torture, and by prominent rights groups in India. A recent evidence-based report, she said, draws attention, once again, to the culture of impunity and lists multiple cases involving chilling methods used to torture civilians.

“The Security Council, as the primary body tasked with maintaining international peace and security, should focus on the root causes of emerging and longstanding conflicts, including Palestine and Jammu and Kashmir, and find inclusive political solutions,” Ambassador Lodhi said. But unfortunately, legal and moral values were sacrificed at the altar of political expediency.

As a result, she said, civilians, who should be the primary subject of protection, have become the principal objects of attack.

For UN peacekeeping operations, protection of civilians should be a priority, Ambassador Lodhi said. “As one of the world’s leading troop contributors to UN Peacekeeping, Pakistan’s well-trained and professional peacekeepers have protected civilians, provided them much-needed medical care, and rebuilt communities.”

In conclusion, Ambassador Lodhi underscored the need to uphold international conventions as their spirit was to protect human dignity even in the midst of war.

“The goal of protection of civilians can best be achieved by preventing the outbreak of armed conflict in the first place. Anything short of that would be treating only the symptoms and not the disease,” she added.

Opening the debate, Secretary-General Antonio Guterres told the Security Council that while safeguards built into the conventions were stronger, “compliance has deteriorated”.

“We are rightly critical when assessing the state of the protection of civilians, for there is great cause of concern”, he said.

At the same time, the UN chief walked members through 20 years of progress, saying that a “culture of protection” had indeed “taken root” that encompasses a comprehensive framework based on international law, and becoming one of the peace and security body’s “core issues”.

Despite this, grave human suffering is still being caused by armed conflicts and lack of compliance with international humanitarian law and “civilians continue to make up the vast majority of casualties”, Guterres said.