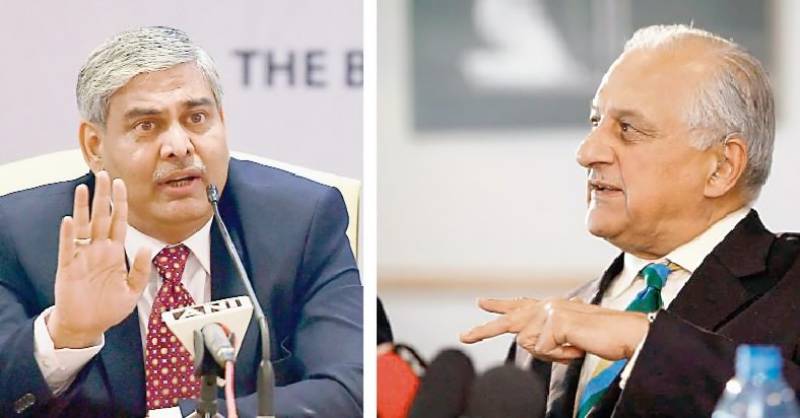 The Pakistan Cricket Board (PCB) will take up the issue of India's scheduled bilateral series with Pakistan in November-December during the International Cricket Council meeting in April, Indian media reported on Friday.

PCB chief, Shaharyar Khan said the board had completed its homework on the legal options available to press a case against the Indian board for its refusal to play Pakistan in a full bilateral series since 2007 resulting in losses of millions of dollars to Pakistan cricket.

"Our legal preparations are complete but first we will take up the issue of the scheduled series with India in November-December this year at the ICC meeting next month," said Khan, a former career diplomat.

"We want to first talk with the new representatives of Indian cricket board in the ICC meeting and ask them about the status of the scheduled series under the MoU signed between both boards in 2014," he said.

The PCB, being aware of the existing relations between the two countries, has already talked about inviting Bangladesh or Sri Lanka in the same window that India is supposed to play.

Khan said that since 2007 and after the MoU was signed, Pakistan cricket has suffered huge losses because India had not even agreed to give Pakistan a chance to host its due series at a neutral venue.

"We have lost at least two home series against India and that calculates to millions of dollars in revenue for us," he said.

Khan said that once the ICC meeting is held and Pakistan takes up the November-December series it will then decide on its future course of action.

"We have not ruled out legal process to be compensated for our huge losses caused by the refusal of India to play with us," he said.

The PCB chief also admitted that the Federation of International Cricketers Association (FICA) was a big hurdle in the way of international cricket returning to Pakistan.

"We held the final of the Pakistan Super League successfully in Lahore but even now test playing boards are not receptive to send their teams to Pakistan because of security concerns," he admitted.

Khan said this included Bangladesh cricket board whom Pakistan has now requested to at least play two T20 matches in Lahore.

Pakistan is due to play a series in Bangladesh in July-August this year and it has asked the BCB to play two of the T20 matches in Lahore.