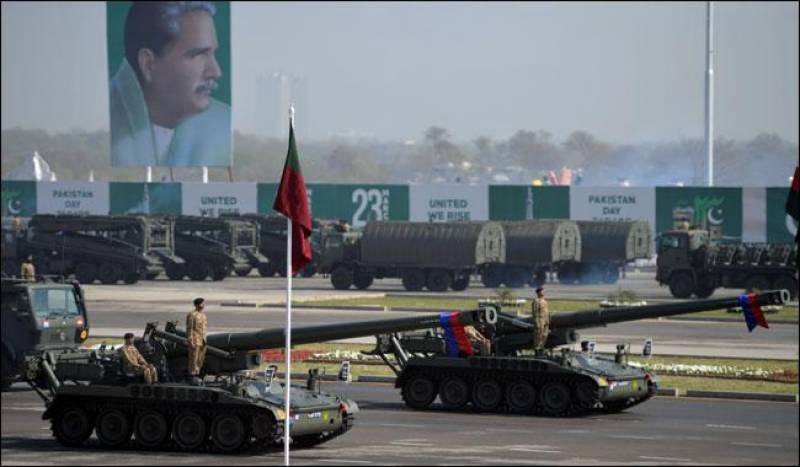 ISLAMABAD: (APP) The country's defence forces on Thursday spectacularly exhibited the spirit, valour and level of preparedness to defend the motherland on 77th Pakistan Day.

The joint services parade, being the main function to mark the day, was held here at Parade Venue, Shakarparian.

Chief of National Defence Forces of South Africa, General Solly Zacharia SHOKE, witnessed the parade as the special guest, which was especially participated by the tri-services troops of People's Liberation Army (PLA) China, a contingent of Special Services Group of Saudi Royal Forces and Meheter Band, the oldest military band of Turkey.

The event has attained historic value as the defence forces of brotherly and friendly countries like, China Saudi Arabia and Turkey participated in the Pakistan Day Joint Services Parade for the first time.

A large number of federal cabinet members, parliamentarians, diplomats, foreign dignitaries, civil and military officers and general public witnessed the historic moments and appreciated the armed and civil forces on display of their mastery and technique achieved by them over the period.

CAS Air Marshal Suhail Aman led the fly past by himself flying a fighter aircraft marking the inauguration of the ceremony by presenting salute to the chief guest and guests while the personnel of the Special Services Group of the three forces presented farewell salute through freefall at the Parade Venue.