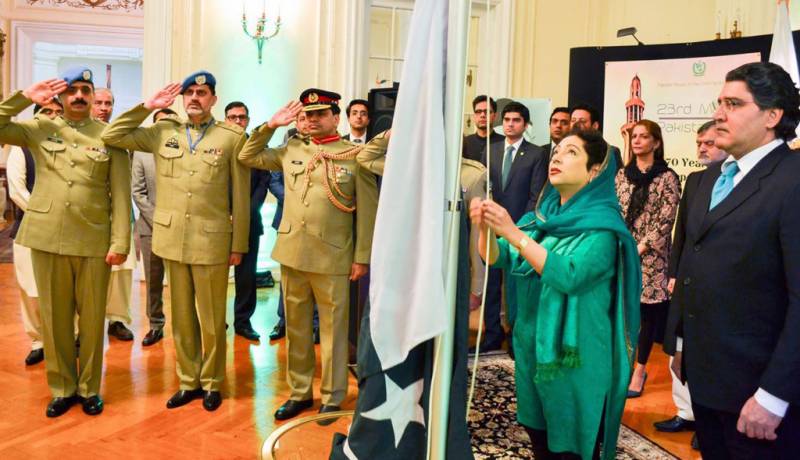 NEW YORK: (APP) Pakistan's national flag was on Thursday unfurled at the Pakistan House, which houses the country's Mission to the United Nations and the Consulate General in New York, at an impressive ceremony to celebrate the Pakistan day.

The ceremony began with recitation of the holy Quran, and as Pakistani Ambassador Maleeha Lodhi hoisted the green-crescent-and-star, the national anthem was played.

Speaking on the occasion, Ambassador Lodhi paid tributes to Quaid-e-Azam Mohammad Ali Jinnah and the sacrifices made by the muslims of the sub-continent for the creation of Pakistan. Since its independence, she said, Pakistan has made much progress although challenges still need to be negotiated.

Efforts were being made by the government to realize the Quaid's vision for the country and to defeat militancy and terrorism, she added.

In the 70th year of its independence, she said, Pakistan has achieved a lot to be proud of. "The challenges we face today, as a nation, will be surmounted, as we always done in the past. We are a resilient nation", she added.

The Consul General recalled the services and sacrifices rendered by the founding fathers for the creation of a separate homeland for the Muslims of India.

The ceremony concluded by a "dua" for the prosperity and progress of Pakistan.

All officers and staff of the Mission and the Consulate General along with their families attended the ceremony.