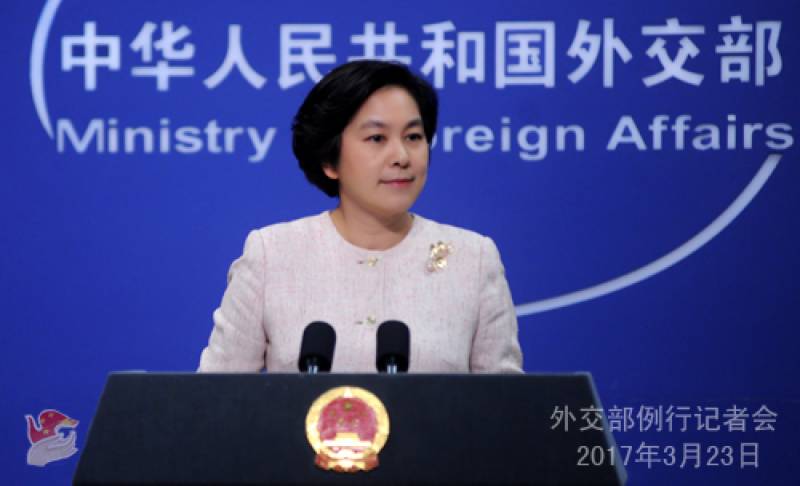 BEIJING: (APP) A spokesman of Chinese Ministry of Foreign Affairs said on Friday that China stood ready to work with Pakistan to move forward the China-Pakistan Economic Corridor (CPEC) so as to benefit the peoples of the two countries.

"The CPEC is a new cooperation framework set up by China and Pakistan to pursue long-term development. It is also an important project of the Belt and Road Initiative", Chinese Foreign Ministry Spokesperson Hua Chunying said during her regular press briefing here.

In advancing the CPEC, both China and Pakistan adhered to the principle of extensive consultation, joint contribution and shared benefits, she added.

The Spokesperson said, the dividends and benefits brought by the CPEC would be shared by people in China and Pakistan and in the region.

Responding to a question, she rejected apprehensions that once the CPEC trade routes officially opened, Pakistan would be flooded with cheap Chinese products, which would make it hard for local Pakistani companies to survive.

"China and Pakistan are all-weather strategic cooperative partners, and the Chinese and the Pakistani military maintain traditional friendship", she added.

Hua Chunying informed, in 2015, Pakistan sent a formation to take part in China's military parade celebrating the 70th anniversary of the victory of the Chinese People's War of Resistance against Japanese aggression and the World Anti-Fascist War.

Joining the Pakistani side in its military parade this time was another vivid testament to epitome of the high-level strategic mutual trust and friendly relations between the two countries and the two military, she added.