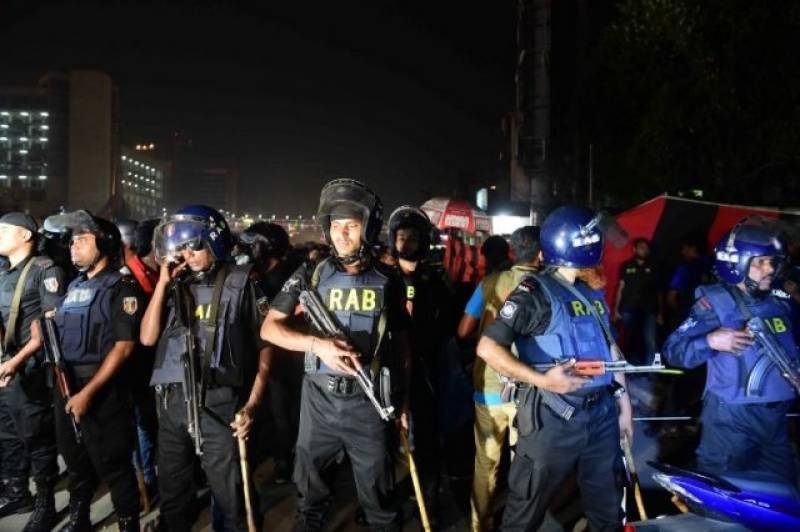 DHAKA: (APP) A bomber was killed in a blast outside the Bangladeshi capital's main international airport Friday, police said, the third in a series of suspected attacks since last week.

The bomb, carried by a man on foot, exploded near a police checkpoint monitoring vehicles heading to Hazrat Shahjahal International Airport.

"The bomb carrier himself was killed," a Dhaka police spokesman,

Ali did not say whether the attack had specifically targeted the checkpoint.

The suspected attack was the third since last Friday, when a suicide bomber blew himself up at a camp for the country's elite security force near the airport.

The attacker was killed and two members of the Rapid Action Battalion, tasked with combating Islamist militancy, were injured.

The Islamic State group claimed the attack, saying "a caliphate soldier in Bangladesh carried out a martyrdom operation with an explosive belt".

The Bangladeshi government deny the presence of IS in the country and reject the jihadists' claim.

IS have also claimed responsibility for a wave of killings since 2015 including for a major attack on a Dhaka cafe last year in which 22 people, including 18 foreign hostages, were killed.

The Bangladeshi government argues a new faction of homegrown extremist group Jamayetul Mujahideen Bangladesh (JMB) was behind that and other attacks.

Last Saturday a man on a motorbike tried to cross a RAB security roadblock in Dhaka carrying a bag with improvised explosive devices.

The latest incident came as police in the northeastern city of Sylhet cordoned off a five-storey building early Friday morning where suspected extremists were holed up.

Police have also been carrying out a series of raids in the southern Chittagong region and say they killed four suspected militants when they stormed an extremist hideout last Thursday.