US restaurant kicks out White House spox Sanders over association with Trump
24 Jun, 2018 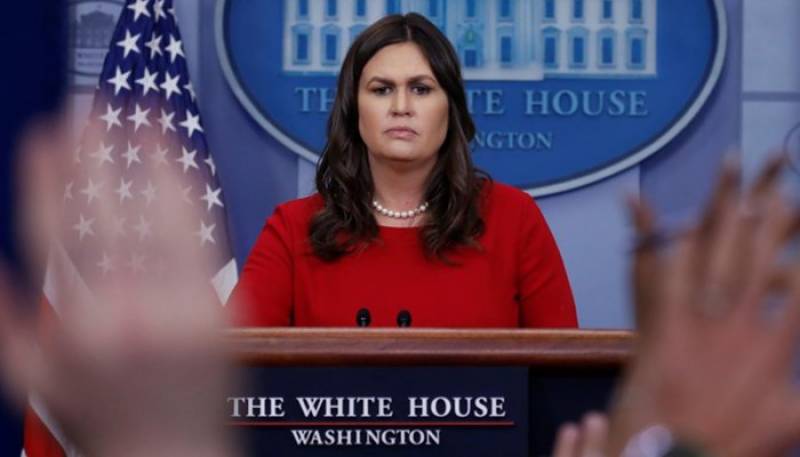 WASHINGTON: Sarah Huckabee Sanders, the press secretary for the White House, took to Twitter Saturday night, complaining about how a restaurant in Virginia allegedly asked her to leave because she works for US President Donald Trump.

"Last night I was told by the owner of Red Hen in Lexington, VA to leave because I work for @POTUS and I politely left,".

"Her actions say far more about her than about me. I always do my best to treat people, including those I disagree with, respectfully and will continue to do so," Sanders added.

Prior to that, in a post originally shared on his Facebook but taken down later, a waiter at the said eatery, Jaike Foley-Schultz, said he "just served Sarah huckabee sanders for a total of 2 minutes before my owner kicked her out along with 7 of her other family members", according to The Hill.

"Apparently the owner didn’t want to serve her and her party out of moral conviction," he said.

The brunt of the action came down to the restaurant's reputation on food-reviewing app Yelp, with people from both ends of the political spectrum bombarded it with comments.

As people, who slammed it for the alleged intolerance, piled up one-star reviews, others, who commended the owner's actions, countered the right-leaning ones with five-star ratings.

However, Stephanie Wilkinson, the restaurant's owner, defended her decision in a conversation with the Washington Post.

Sanders, she said, served an “inhumane and unethical” administration and considering that her 7,000-strong town of Lexington had voted against Trump, it felt to her "like the moment in our democracy when people have to make uncomfortable actions and decisions to uphold their morals”.

Wilkinson informed the Post that several of her employees were gay and were aware that the White House spokesperson sided with Trump’s wish to ban transgender people from entering the US military.

So, after consulting them, she took Sanders aside and asked her to leave.

In "a polite and direct fashion,” Wilkinson told her "that the restaurant has certain standards that I feel it has to uphold, such as honesty, and compassion, and cooperation.

All in all, the White House press secretary was 86ed — a code word in the restaurant services to indicate table eviction.

Mike Huckabee, the former governor of Arkansas and father of Sanders, labelled the eatery's move as "bigotry".

Other instances of similar behaviour

Earlier this week, on Tuesday, a group of protestors went to a Mexican restaurant in Washington to voice their outrage and disappointment against the US immigration policy, especially the ongoing situation at the US-Mexico border, to Kirstjen Nielsen, the secretary of the Department of Homeland Security (DHS).

At the MXDC Cocina Mexicana, protestors chanted “Shame!” and “End family separation!” while she sat with her head down for over a few minutes, Washington Post had reported.

“How dare you spend your evening here eating dinner as you’re complicit in the separation and deportation of over 10,000 children separated from their parents?

"We call on you to end family separation and abolish ICE,” one of the demonstrators had said.

“In a Mexican restaurant, of all places!”

“Have you listened to it? Do you hear the babies crying?”

While at that point, Nielsen did not acknowledge the protestors, DHS spokesperson Tyler Houlton had later said the group comprised people who “share her concern” about the immigration system.

On the other hand, back in April, the New York Post had reported that a New York judge had ruled it was "not outrageous conduct" when the staff of The Happiest Hour, a bar, kicked out a Trump supporter wearing a "Make America Great Again!" hat.\

According to Greg Piatek, the person who was told to leave, the staff had said: “Anyone who supports Trump — or believes in what you believe — is not welcome here! And you need to leave right now because we won’t serve you!”

The bar’s lawyer, Elizabeth Conway, said “supporting Trump is not a religion”.