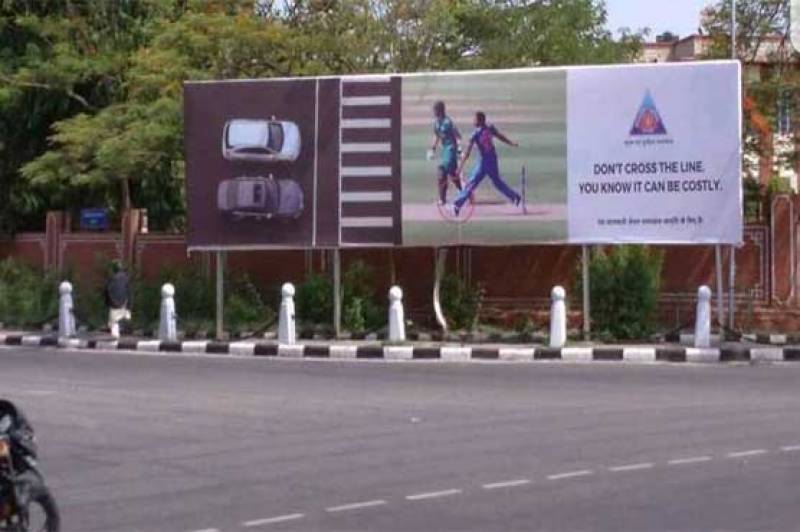 NEW DELHI: Indian Police has ridiculed one of their key bowler and the cricket icon Jasprit Bumrah over his no ball that paved the way for Indian defeat at the hands of Pakistan in the Champions Trophy finals.

India fast bowler Jasprit Bumrah was mocked by the Jaipur Police for the infamous no-ball that he bowled against Pakistan in the final of ICC Champions Trophy when they placed a hoarding on a road with Bumrah’s picture and a caption, “Don’t cross the line. You know it can be costly.”

It is worth mentioning here that Bumrah got the wicket of Pakistan opener Fakhar Zaman when he was playing on just three runs, but the opener got a lifeline as the bowler had crossed the line of the popping crease.

Fakhar then demolished the Indian bowling and went on to make his maiden one-day international (ODI) century which helped Pakistan to put up a mammoth total of 338 runs on the scoreboard.

Jasprit Bumrah was criticized strongly by the Indian fans afterwards, and even his teammate Hardik Pandya wrote on Twitter "Hume to apno ne loota, gairo me kahan dum tha (We were looted by our own, why blame others)."

Presumably, Pandya’s message was for Jasprit Bumrah for bowling the no-ball, and for Ravindra Jadeja who was involved in his run out. But Jaipur Police went one step ahead and placed Bumrah’s picture in an advertisement for road awareness.

The right-arm fast bowler took to Twitter and slammed the authorities for mocking him publically. He wrote, “Well done Jaipur traffic police this shows how much respect you get after giving your best for the country.”