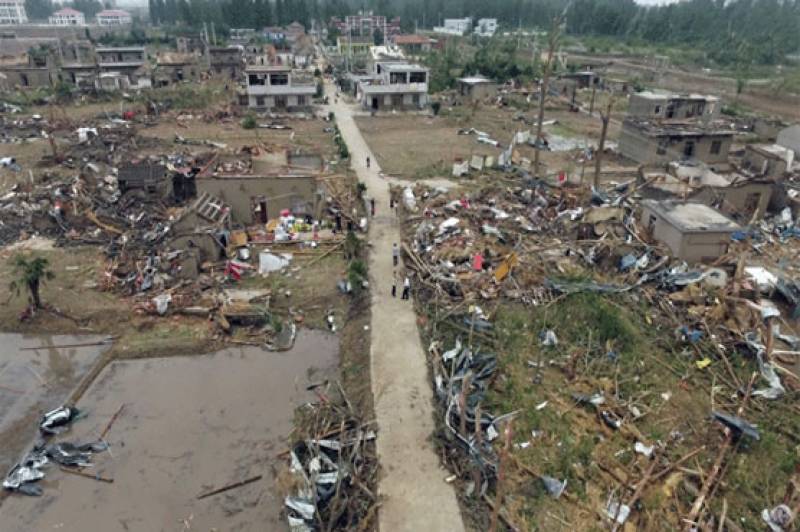 YANCHENG: (APP) Survivors scrabbled through the rubble of their homes Friday after hurricane-force winds and a tornado left at least 98 dead in China, with hundreds more injured.

Whole villages were levelled and huge trees felled when winds of up to 125 kilometres (77 miles) per hour struck around Yancheng city in the eastern province of Jiangsu on Thursday, the official Xinhua news agency said.

In Shizhuang, scores gathered beside a large fishing pond where a male corpse floated in the water, as workers cleared up fallen electricity poles nearby.

A distraught woman who thought he was her missing husband was held up by relatives, as another bystander asked: "How come no one is pulling him out yet?"

So far 98 people have been confirmed dead in the storm and 846 hospitalised with injuries, Yancheng's deputy mayor Wu Xiaodan told a briefing, according to the city's verified microblog.

President Xi Jinping ordered "all-out rescue efforts" after what Xinhua said was one of the worst disasters ever to hit Jiangsu, including the worst tornado to hit China in half a century.

In Funing County, one of the hardest-hit areas, residents shifted through the fallen bricks and pillars of their destroyed homes, many with their roofs torn off, and rubble spilled into a river.

Wu, the official, said that 28,104 houses in the county had been affected.

Funing resident Sun Yazhou was driving a concrete mixer truck when a tornado passed him, tearing the glass out of his vehicle windows.

"The sky was completely dark. I was scared, but I had nowhere to run. I had to wait it out," he told AFP.

Zhou Xiang, head of the provincial fire corps, said the search for survivors in the debris had been completed, according to Xinhua, and the clean-up was now underway.

More than 1,300 police officers had been mobilised to help, the agency added.