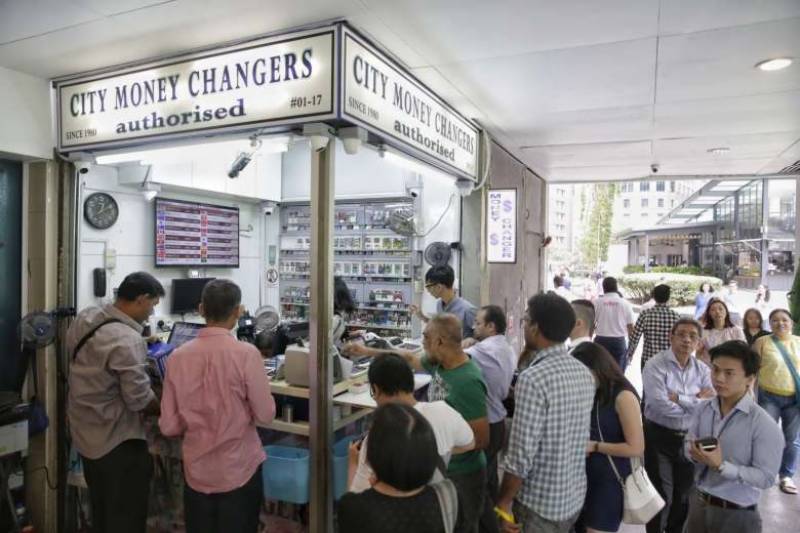 SINGAPORE: (APP) The crashing pound sent people flocking to money changers to exploit a favourable exchange rate in Singapore on Friday after the currency plummeted following Britain's decision to leave the European Union.

People looking for holidays and those with children studying in Britain joined long lines at Change Alley, a mall in the city-state's business district known for its concentration of money changers, after the pound reached historic lows against the Singapore dollar.

The pound also briefly dived to a 31-year low against the US dollar.

"I'm hoping that I can get a favourable rate so I'll save a few thousand dollars on my daughter's school fees," said Thomas Lee, who was among dozens in line at Raffles Money Changer.

The company executive, whose daughter is attending university in the UK, had Sg$5,000 in cash, which he hoped would get him at least 2,600 pounds.

"In the last year, I've lost a few thousand dollars just on the exchange rate alone, but hopefully with the pound so low now, it'll even out," Lee told AFP.

Joseph Rozario, 60, who is going on holiday to the UK next month, said he was planning to buy about 1,000 pounds intially.

"I'll need about 3,000 pounds in total but I'm changing it in small amounts to speculate, so hopefully I might be able to save a few dollars," he said.

"I think the market will correct itself and what we've seen today is a knee-jerk reaction."

But the sudden plunge in the British currency caught money changers off guard, with several putting up "out of stock signs" for the pound.

"My cost price was Sg$1.97 a pound, I obviously can't sell for anything lower than that, because I'm going to make a loss so I'd rather say I'm out of stock," said money changer Mohamad Rafeeq.

"The next few years will be uncertain ones for Britain and Europe. Leaving the EU is as complicated as joining it," Singapore Prime Minister Lee Hsien Loong said in a Facebook post.

Separately, the website of UK-based online retailer ASOS, which is highly popular among young Singaporeans, crashed after increased shopper traffic triggered by the weak pound.