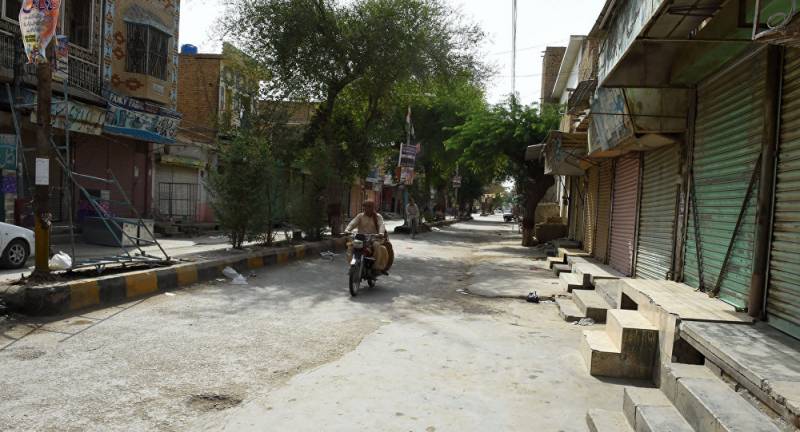 MOSCOW - Dr. Jumma Marri Baloch, a prominent leader of the Baloch independence movement and designer of the separatist flag, recently renounced his decades-long campaign against Pakistan while attending a Pakistani Unity Day event last weekend in Moscow, where Sputnik’s Andrew Korybko had the chance to conduct a brief interview with him.

*Sputnik: Tell us little about yourself: how and why did you come to Russia, how long have you been here and what do you do presently?*

*Jumma Marri Baloch:* I think everybody who was interested about the Baloch affairs might know my struggle to free Balochistan, which is not hidden from anyone. I will not be wrong if I say that I am from those people who were always on the forefront of the Baloch freedom struggle — many of the readers might know the fact that the Free Balochistan flag, which is currently very popular and is in use, was designed by me.

I devoted my entire life to the Free Balochistan movement and used the power of my pen by writing in every aspect for the Baloch cause, I have created and helped create many pro-Baloch movement websites and took part in anti-Pakistan seminars and conferences around the world.

For the sake of Free Balochistan I left my home, Pakistan, province, tribe and even my father and brothers. In 1979, due to the Balochistan movement I, along with my family, left for Afghanistan and settled there. Since 2000 I am in self-exile in Moscow.

And again I sacrificed everything for the sake of a movement that turned out to be fundamentally faulty and empty from within. In this struggle I went so far that I was completely disconnected from my Pakistani brothers and family. I supported every aspect of the Free Balochistan movement and everybody who was connected with the freedom ideology. Due to this ideology, I was known as a Baloch sub-nationalist leader.

*Sputnik:* *What does it mean to be a Baloch, and how would you describe your people and their culture to someone who has never heard about them before?*

*Jumma Marri Baloch:* It's an honor to be a Baloch: the Baloch are brave, hospitable and honest people. The Baloch have their own code of conduct, known as Balochimayar, that guides Balochs in their daily lives and social relations. It is a code of conduct written down for Balochs in their ancient history, which includes being generous in hospitality to guests and offering refuge to people who seek protection.

The Baloch nation consists of many different tribes; their tradition and common values are similar. They have a united civil society and they speak a common language, called Balochi. This language was driven from the ancient Indo-Iranian language.

*Sputnik: How do you balance being a proud Baloch and a patriotic Pakistani?*

*Jumma Marri Baloch: *Patriotism is the feeling of loving your country more than any others and being proud of it. The Baloch love Balochistan and Balochistan is a part of Pakistan. They love Pakistan and at the same time they are proud of being Balochs.

*Sputnik: Who is behind the so-called "Free Balochistan" Campaign, what are they aiming for, and how do they operate?*

*Jumma Marri Baloch:* There are no doubts that India is squarely behind the unrest in Balochistan. I am a witness to it from within: India tries to counter Pakistan's support for Kashmir and India wants to pay Pakistan in the same coin by supporting a few so-called Baloch leaders who are enjoying very luxurious lifestyles in such expensive cities as Geneva and London. These people are sending some money to create unrest in Balochistan like blowing electricity supplies, mining bridges and putting mines in the roadside to keep the money supplies open.

*Sputnik: What can you tell us from your experiences about the differences between past and present struggle in Balochistan? What are the support levels for the current one?*

*Jumma Marri Baloch:* The differences between the past and present are very clear: the past Baloch struggle was based on brotherhood and an ideology. The Baloch fighters who used to join the struggle used to come with their own weapons, money and supplies and were genuine and honest in their beliefs; the leadership was also honest and was with its people. But the current struggle has been covered with fakes and greed from the beginning: fighters fight for monthly salaries and leaders live luxurious lives in western countries. If India stops the money supplies the struggle will end the next day. Their leaders' ideologies are personal ambitions, ego and greed for power and wealth.

*Sputnik: What is the reason why some international media have been repeating the claims of Baloch separatists and sometimes even lobbying on their behalf, and how does this relate to global fake news industry?*

*Jumma Marri Baloch: *No international media pays any attention to these Baloch separatists except Indian media that are working closely with the Indian intelligence who are paid to cover their paid agents working as Baloch freedom fighters. These are all Indian attempts to silence the voices of the Kashmir struggle for freedom. I guarantee if Pakistan gives even the slightest hint to the Indians that they will stop supporting the Kashmiri, the Hindus will dump the Baloch next day down in a sewage canal.

*Sputnik: What is the most effective way to debunk these falsehoods and show people the truth about Balochistan and its native people's relationship to the rest of Pakistan?*

*Jumma Marri Baloch:* Develop the awareness of people about the negative propaganda, through education and empowering the local people to run their affairs without intervention. The Baloch must be respected, first of all, on their own soil, then such negative propaganda will have no effects. The majority of the Baloch people have no problem with Pakistan, but they have questions to the government as every normal citizen of any country around the world.