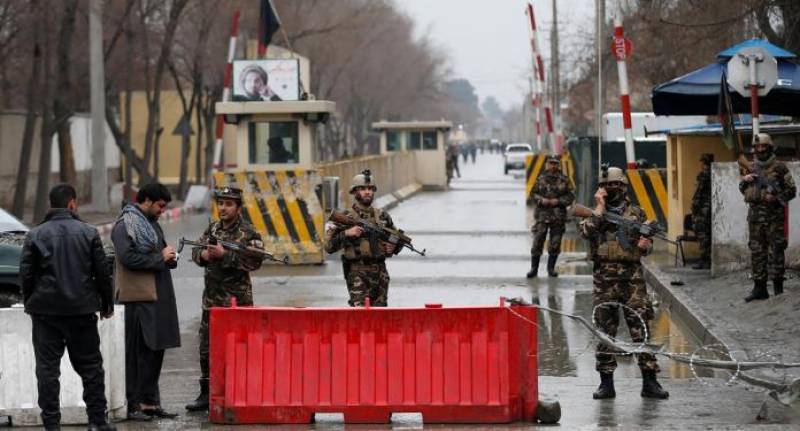 KABUL: At least 23 people were killed and more than a dozen wounded in multiple suicide bombings and attacks in Afghanistan on Saturday, officials said, the latest in a series of assaults in the war-torn country.

In the biggest attack, Taliban militants stormed an army base in the western province of Farah overnight, killing at least 18 soldiers.

“Last night a big group of militants attacked an army base in Bala Buluk district of Farah. Unfortunately, we lost 18 soldiers, two soldiers were wounded. We have sent more reinforcements to the area,” defence ministry spokesman Daulat Wazir said.

The Taliban claimed responsibility for the attack. Deputy provincial governor Younus Rasooli said the authorities had sent a fact-finding delegation to Bala Buluk to investigate the assault. In another attack, a suicide bomber detonated his explosives near the diplomatic area of Kabul during the morning rush hour, killing at least three people and wounding five others, deputy interior ministry spokesman Nasrat Rahimi told foreign news agency.

“At around 8:30 am, a suicide bomber on foot, well-dressed with a necktie on, was identified at a checkpoint. He blew up his explosives, killing three and wounding five others,” he said, updating an earlier toll.

A security source who requested not to be named said the explosion happened near a compound belonging to the National Directorate of Security (NDS), the Afghan intelligence agency.

The NDS compound is located near the NATO headquarters and the US embassy. “I was driving nearby when I heard a big explosion, the windows of my car were smashed. I saw several wounded people on the street near me,” a witness told Tolonews TV adding that security forces had since swarmed the area, closing off the main road leading to the attack site.

In December, a suicide attacker on foot blew himself up near the same compound, killing at least six civilians.

There was no immediate claim of responsibility for the latest attack in Kabul, which in recent months has become one of the deadliest places in Afghanistan for civilians.

Since mid-January, militants have stormed a luxury hotel, bombed a crowded street and raided a military compound in the capital, killing more than 130 people as the city remains on high alert fearing further violence.

In two other attacks on Saturday in volatile southern Helmand province, suicide car bombs killed at least two soldiers and wounded more than a dozen others, officials said.

In the first incident, militants used a Humvee to attack an army base in Nad Ali district but the vehicle was destroyed when soldiers identified it and hit it with a rocket propelled grenade, provincial spokesman Omar Zawak told foreign news agency. “Unfortunately, two soldiers were killed in the attack and seven wounded,” he said.

The Nad Ali attack was followed by a second suicide car bombing in the provincial capital Lashkar Gah that wounded seven people. The attack was against an NDS compound and near a police headquarters in the city, Helmand police spokesman Salaam Afghan told foreign news agency.

The Taliban claimed both attacks in Helmand. Militants including the Taliban and the Islamic State group have stepped up their attacks on beleaguered Afghan troops and police in recent months, sapping morale already hit by desertions and corruption.

Afghan soldiers have taken what the UN describes as “shocking” casualties since international forces ended their combat role at the end of 2014, though troop casualty figures are no longer released.