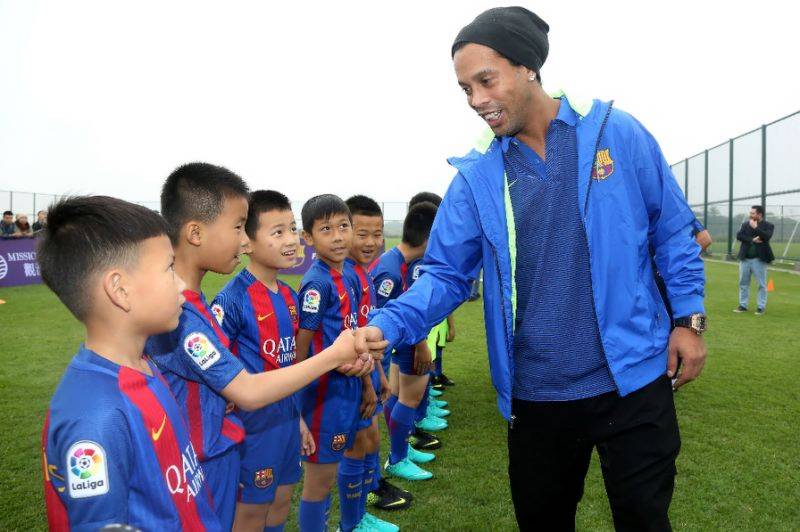 The Barcelona and Brazil great and club president Josep Maria Bartomeu met children and toured the site at the Mission Hills golf complex on Hainan island, which will have seven pitches when it opens later this year.

The academy, which will also serve as a training centre for China's national team and top clubs, is one of tens of thousands of facilities expected in the coming years as China strives to become a football superpower.

"We know Barcelona FC works very well with kids, with high-level professionals that are coming to work here," Ronaldinho said. "I believe they will help a lot and Chinese football is going to learn a lot."

The new facility will be the biggest of Barcelona's 20-plus academies around the world, and the first directly managed by club staff.

It is still dwarfed by the Evergrande Football School in Guangdong, which has links with Barcelona's Spanish rivals Real Madrid and more than 2,000 students, making it the world's biggest academy.

But Mission Hills vice-chairman Tenniel Chu told AFP in November that the Barcelona academy will eventually grow to 30 pitches, alongside an international school with a capacity of 5,000.

China, whose national team is wallowing at 86th in the world rankings, plans to have 50,000 academies and football-focused schools by 2025, the education ministry said this week.

"Probably it will be the (biggest) project of football in the world," Bartomeu said, referring to the new academy.

"I think China needs... what Mission Hills is doing in Hainan, and for China it's going to be a new step for the growth in football.

"For me, the temperature, the ambience, the people, and mainly the terrain of this island are going to be something unique for... the development of football in China."

Despite its 1.3 billion population, China punches well below its weight in football, reaching the World Cup only once in its history -- in 2002, when the team lost all three group games without scoring a goal.

But under President Xi Jinping, a football fan, China has ambitions of hosting and even winning the World Cup, triggering a rush of Chinese investment in foreign clubs, players, coaches and media rights.

Alongside the academy in Hainan, Barcelona will also open a 7,000-square-metre (75,000 square feet) 'Barcelona Experience' centre, featuring exhibits and merchandise for sale.

Some football experts have cast doubt on the efficiency of academies, saying the sport's key skills are best learned organically.