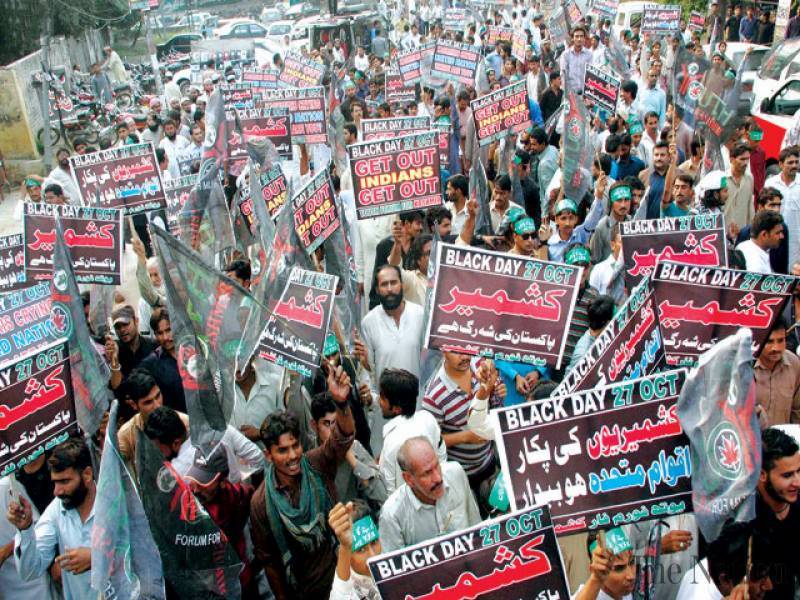 MIRPUR (AJK): Azad Jammu and Kashmir on Monday banged with anti-India rallies as Black Day to register protest and indignation over the martyrdom of 10 more innocent Kashmiris by the Indian occupying forces in the Held Kashmir’s Kolgam area. The Black Day was followed by the state-wide protest demonstrations and rallies against martyring of 10 Kashmiris including a woman in Kolgam by Indian occupying forces on Saturday and Sunday.

Addressing a protest rally in the state’s capital town, AJK Prime Minister Raja Farooq Haider Khan said India was committing war crimes and killing Kashmiris in a bid to change the demography of the IHK. He said Pakistan should also extend material help apart from political, diplomatic and moral help to people of Kashmir.

“In view of present situation emerging in IHK, the Prime Minister of Pakistan on his return should call a meeting comprising of APHC, AJK leadership and all political parties of Pakistan and take up the matter of fresh Indian aggression against Kashmiris with UN Security Council in the light of decisions of the meeting” he said. He assured Hurriyat Conference that the base camp government firmly stand with them. It would also stand shoulder by shoulder with the armed forces of the country in the hour of trial, he added.

Haider said Indian forces detonated a house to martyr three freedom fighters. When the arm less people gathered to pull the dead bodies of the martyrs out of the destroyed house Indian forces fired rockets on them killing six and injuring 60 others. The forces did not even spare a woman who was also martyred. The Premier said this is a clear state terrorism. He called upon international community to take serious notice of it.

Farooq Haider noted that Indian Prime Minister Modi was adhering to the policies of Israel in Occupied Kashmir and was engaged in genocide of Kashmiris on the pattern of that country. He said government of Pakistan should extend material help to Kashmiris to enable them to resist against their genocide at the hands of India. He said freedom fighters are fighting against the fourth largest military power of the world. He said Kashmir liberation struggle is the only struggle in the world that has no external support.

After the protest demo a rally was held against Kulgam incident which was led by the Prime Minister. The participants of the rally held placards and black flags. They chanted slogans against India and demanded the international community to stop India from committing war crimes in IHK.

Meanwhile commenting on the victory of PML-N candidate in the by-poll in Hajirah, the Prime Minister said it speaks that people reposed their confidence in the leadership of Nawaz Sharif and on the two years performance of the ruling party in AJK. He assured that government would pool all resources to complete the mission of late K.B. Khan. The historic victory of Amir Altaf is pretty encouraging for us, he expressed satisfaction. He assured that promises made with people of constituency-2 would be fulfilled by his government. he said.