An unprecedented summit between UAE and Israeli top leaders in Egypt
23 Mar, 2022 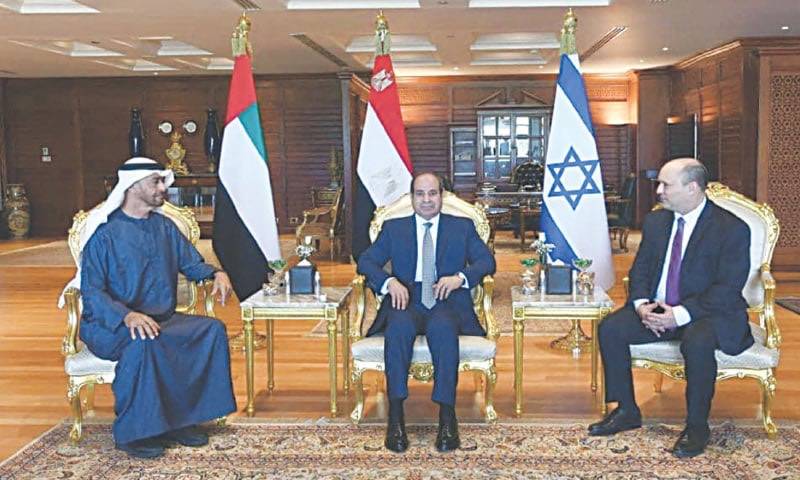 CAIRO: Egypt hosted the Israeli and UAE leaders for unprecedented three-way talks on Tuesday as the Ukraine war rocks energy and food markets and major powers inch towards a revived Iran nuclear deal.

It comes nearly a month after Russia invaded Ukraine in a move that sparked concerns about security and sent prices of oil, wheat and other key commodities soaring.

Egypt, Israel and the United Arab Emirates are allies of the United States but they have so far avoided taking positions against Russia over its war on Ukraine.

“Against the backdrop of the recent developments in the world and the region, the leaders discussed the ties between the three countries and ways to strengthen them on all levels,” said a statement from Bennett’s office.

It was the first summit of its kind, and signalled “a new doctrine” of regional diplomacy championed by the UAE, said Mustafa Kamel al-Sayyid, a professor of political science at Cairo University. Bennett and Sheikh Mohammed had arrived in Egypt on Monday.

Israeli media said the leaders would also discuss reports that Iran and Western powers, including the United States, are close to a deal to revive the 2015 nuclear accord. -APP/AFP