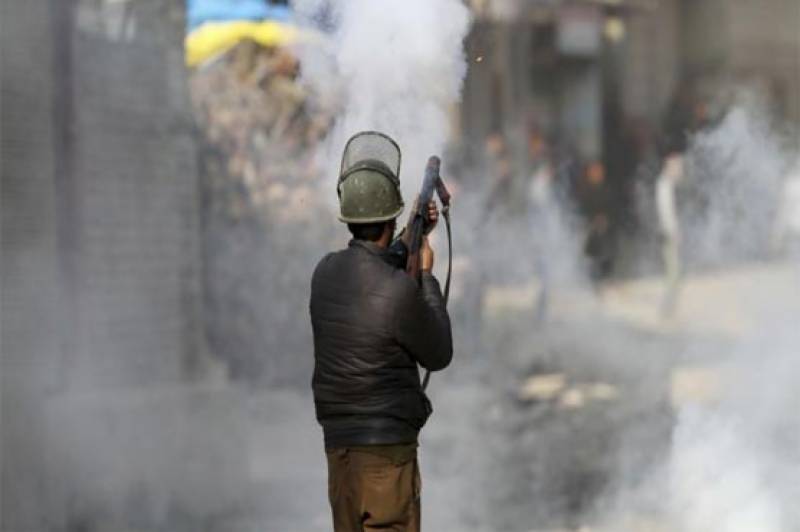 An eyewitness said that a huge number of youth descended on the Srinagar-Muzaffarabad highway at Zainakote as the news of killing of Salafi spread. He said the youth hurled rocks at the Indian police and paramilitary forces which retaliated by firing tear gas shells, reported Kashmir news agencies.

Salafi was killed along with three associates in Nowshera Khiram village of Srigufwara earlier Friday. A civilian and a policeman were also killed in the firefight. Authorities have suspended mobile internet services in all four south Kashmir districts and in Srinagar to check the spread of any kind of rumours.

According to Kashmir Media Service, the Indian troops killed four youth, Dawood Salafi, Majid Manzoor Dar, Muhammad Ashraf Itoo and Aadil Hussain Mir, and destroyed a residential house during a cordon and search operation in Srigufwara area. The owner of the house, Muhammad Yousuf Rathar, was also killed while his wife, Hafeeza Begum, was critically injured in the firing of the Indian troops. Earlier, an Indian policeman was killed and two troops were injured in an attack in the same area. In the meantime, five Indian soldiers and four policemen were injured in a grenade attack in Tral.

Massive protests erupted in Srigufwara, Islamabad, Pulwama, Srinagar, Sopore, Hajin and other areas against the killings. Indian police and troops fired pellets and teargas shells to disperse the protesters, triggering intense clashes between the demonstrators and the forces’ personnel. Dozens of people sustained injuries during the clashes. The occupation authorities suspended internet services in Islamabad, Pulwama and Srinagar districts.

A spontaneous strike was observed in Islamabad and Pulwama districts against the killings. Complete strike continued in Tral area of Pulwama on the third consecutive day to mourn the killing of three youth who were martyred by the Indian troops on Tuesday.

Hurriyat Forum Chairman Mirwaiz Umar Farooq, addressing the 55th Founding Day ceremony of his party in Srinagar, appealed to the international community to take cognizance of the Indian brutalities on the people of the occupied territory and take steps towards settlement of the lingering Kashmir dispute.

On the other hand, after the failure of its army and paramilitary forces to suppress the Kashmiris’ ongoing freedom movement, India has now sent commandos of the elite National Security Guard, a special forces unit under the home ministry, for the purpose. As per media reports, the NSG commandos, whose presence in Occupied Kashmir was cleared last month by the Indian home ministry, will soon be deployed during cordon and search operations in the Valley