Kulsoom’s condition slightly better but not out of danger yet: Nawaz
23 Jun, 2018 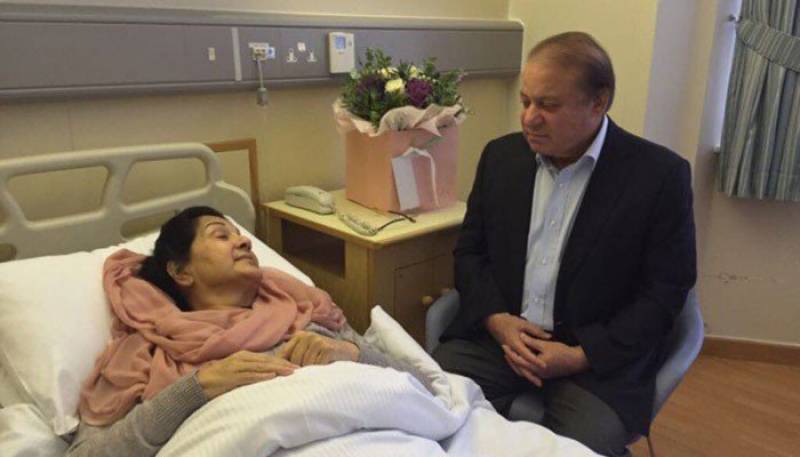 ISLAMABAD: Former prime minister Nawaz Sharif said that the condition of his wife, Begum Kulsoom, is slightly better but she is not completely out of danger yet.

Nawaz, in an interview to BBC Urdu, expressed regret that had he visited his wife before last Thursday, he would at least have been able to find her conscious.

“[Begum] Kulsoom’s condition is better compared to before. [I wish] I had [reached here] before [last] Thursday, she was at least in a conscious state then,” he said, and requested for prayers for his ailing wife.

The ex-prime minister's wife was admitted to Harley Street Clinic on June 14 after suffering a cardiac arrest and has been on life support since. She had been undergoing treatment for throat cancer during the past few months.

Nawaz and his daughter, Maryam, reached London the same day to tend to Begum Kulsoom.

Speaking to Hussain Nawaz said that according to doctors, Kulsoom Nawaz's organs will take time in functioning normally.

He said that his mother's condition was better than the first day, when she suffered a cardiac arrest on June 14.

"The good news is that there is no bad news," Hussain said, adding that his mother was in extremely critical condition for the next 24 hours after the cardiac arrest.

He, however, said that Begum Kulsoom's condition was still critical and she was on ventilator.

Earlier this week, sources quoted doctors treating Begum Kulsoom as saying that her vital organs were functioning normally and she even opened her eyes once after being put on life support.