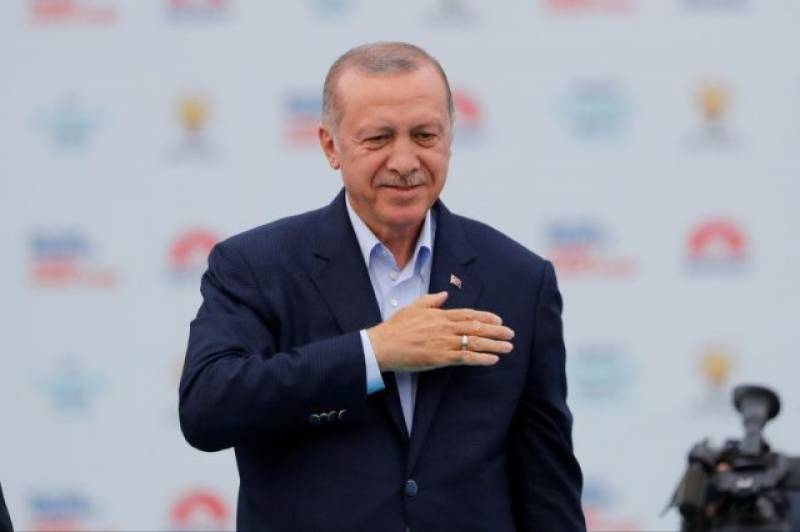 Turkey’s main state-run TV station devoted 67 hours of airtime to President Tayyip Erdogan and his AK Party last month in the run-up to elections, according to two opposition members of television watchdog RTUK.

His main presidential rival, Muharrem Ince, had less than seven.

“They make pro-government broadcasting with the taxes we pay,” Umit Ozdag, deputy chairman of the opposition Iyi party, which got just 12 minutes airtime, said at a recent protest at TRT offices.

Critics say Erdogan’s near-monopoly on the media may be the biggest obstacle to the free and fair conduct of the June 24 elections, which are being held under emergency law after a failed military coup two years ago.

Free speech advocacy group Reporters Without Borders in April ranked Turkey 157 out of 180 countries in its annual report on global press freedom, and estimates about 90 percent of Turkey’s newspaper coverage is pro-government.

RTUK, whose make-up is allocated by parliament on the basis of party seats, has been monitoring political coverage in the run-up to the presidential and parliamentary vote.

Television is dominated by TRT and its affiliated channels but even private broadcasters give far more air time to Erdogan than his challengers, said Ismet Demirdogen, one of four opposition party appointees in the nine-member body.

In March, Dogan Holding, long seen as a pillar of Turkey’s secular establishment, sold the top-selling Hurriyet newspaper and several broadcasters, including CNN Turk, to Demiroren Holding, which owns two pro-government dailies. Only a handful of newspapers that are not pro-Erdogan remain.

“Voters have very limited access to information, independent news coverage, and non-government-controlled commentary about all the candidates and parties contesting the elections,” Human Rights Watch said in a report in early June.

RTUK chief Ilhan Yerlikaya denies that Erdogan has dominated coverage and says only a fraction of the complaints it receives relate to perceived unbalanced coverage.

“Terrorist organizations are carrying out an image campaign against Turkey using propaganda aimed at Europe to say that there is no press freedom in Turkey,” he told state news agency Anadolu.

Yerlikaya turned down an interview request, and TRT declined to comment on the issue.

The Turkish government denies interfering in the media.

“It’s not the government or any political party who decides how much television coverage candidates or parties receive. Media institutions make their decisions based on news worthiness,” a government official told Reuters, asking not to be named because of the sensitivity of the issue.

ONE VOICE, MANY CHANNELS

Erdogan has frequently lashed out at independent media for their critical coverage of the crackdown that followed the abortive putsch in 2016 and Turkey’s military operations into northern Syria.

More than 120 journalists have been detained and more than 180 media outlets closed on suspicion of links to the network of a US-based cleric blamed for organizing the failed coup.

In April a court sentenced 14 staff of the opposition Cumhuriyet newspaper – one of the few remaining voices critical of the government – to prison terms on charges of terrorism and supporting the cleric, Fethullah Gulen. They all denied the charges and were released pending appeal.

Ahmet Sik, a prominent journalist and author who was given the harshest sentence – seven and a half years – is running for parliament for the pro-Kurdish HDP party.

“For a very long time, there has been very heavy oppression and domination on the media. The mainstream media is either siding with the ruling party, has surrendered to the ruling party, or has kneeled before it,” he told Reuters.

Turkish broadcasters, he said, are “one voice, with many channels”.

Recent polls indicate the vote may be closer than anticipated when Erdogan called the snap elections in April, suggesting he may be pushed to a second-round run-off for the presidency and his ruling AK Party could lose its parliamentary majority.

The opposition says changes to election regulations passed by parliament three months ago open the door to fraud on the day of the vote, however.

The legislation allows ballots that are not stamped by the local electoral board to be admissible – formally approving a practice that caused a widespread outcry from government critics and concern from election monitors at a referendum last year.

Some ballot boxes in the mainly Kurdish southeast have been relocated which officials say is aimed at stopping voter intimidation. The pro-Kurdish HDP opposition party says it has moved ballots from areas where it has strong backing to nearby villages with more AK Party support, however.

The Organization for Security and Cooperation in Europe will monitor the vote, but international rights groups and opposition politicians said the restrictions on press freedoms had already cast a shadow over the vote’s legitimacy.

“It is difficult to imagine how credible elections can be held in an environment where dissenting views and challenges to the ruling party are penalized so severely,” he said. Reuters